August 24, 2022 – Bedrock Collectibles is excited to announce it has signed a multi-year, worldwide licensing deal with Valiant Entertainment to create high-end collectible statues for fan favorite characters across the Valiant Universe. Every statue will be produced in limited-edition quantities and will be individually numbered to enhance collectibility. 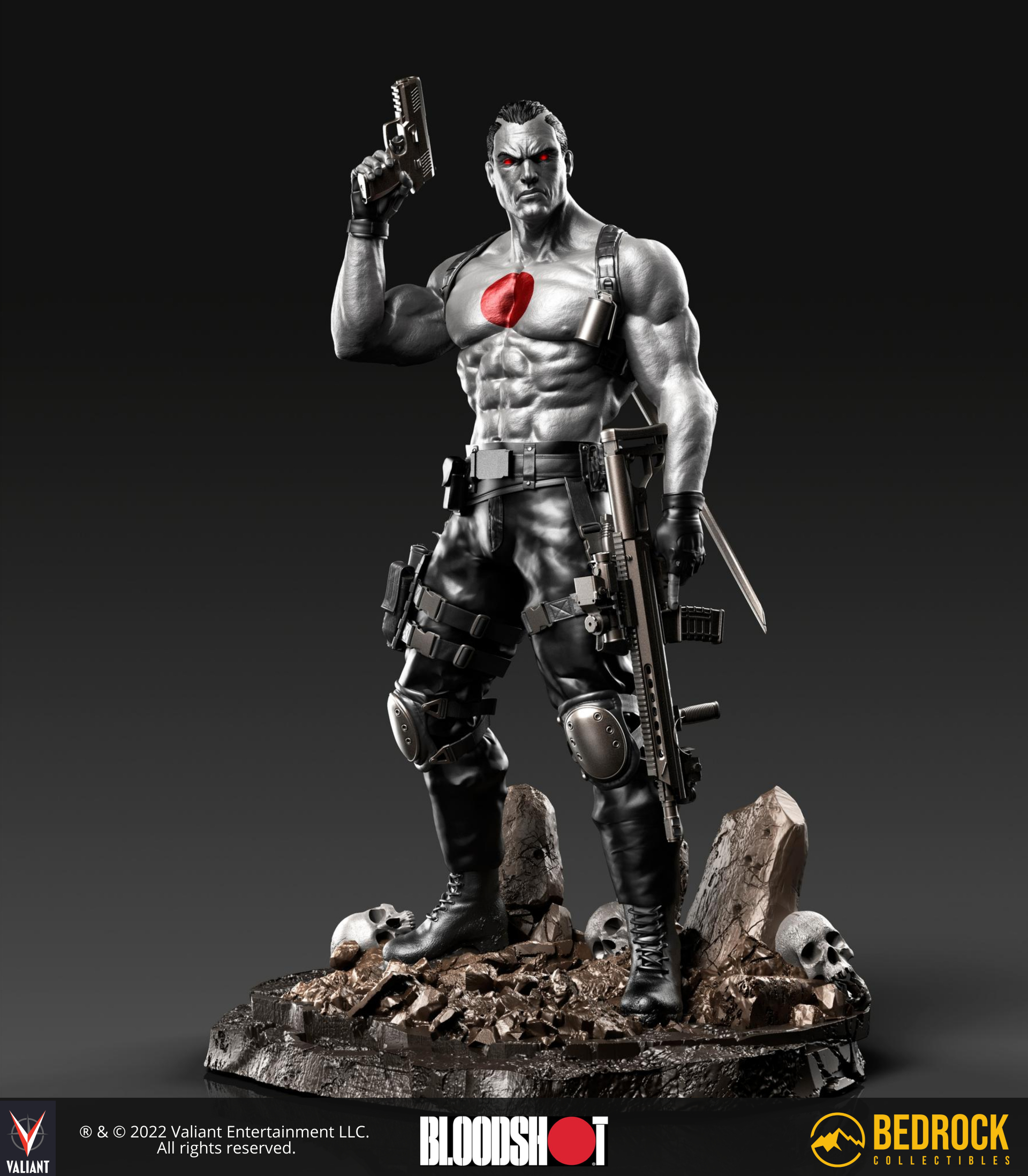 To kick off the premium statue line, the team is proud to reveal the first project is none other than the nanite-infused super soldier himself, BLOODSHOT! Bedrock Collectibles’ BLOODSHOT statue will be 1/4 scale, roughly 20″ tall, sculpted in highly detailed polystone resin. A BLOODSHOT statue would not be complete without a slew of weaponry. That is why the statue comes with multiple switch out arms and weapons, including dual handguns, one assault rifle, and a submachine gun with alternative poses. 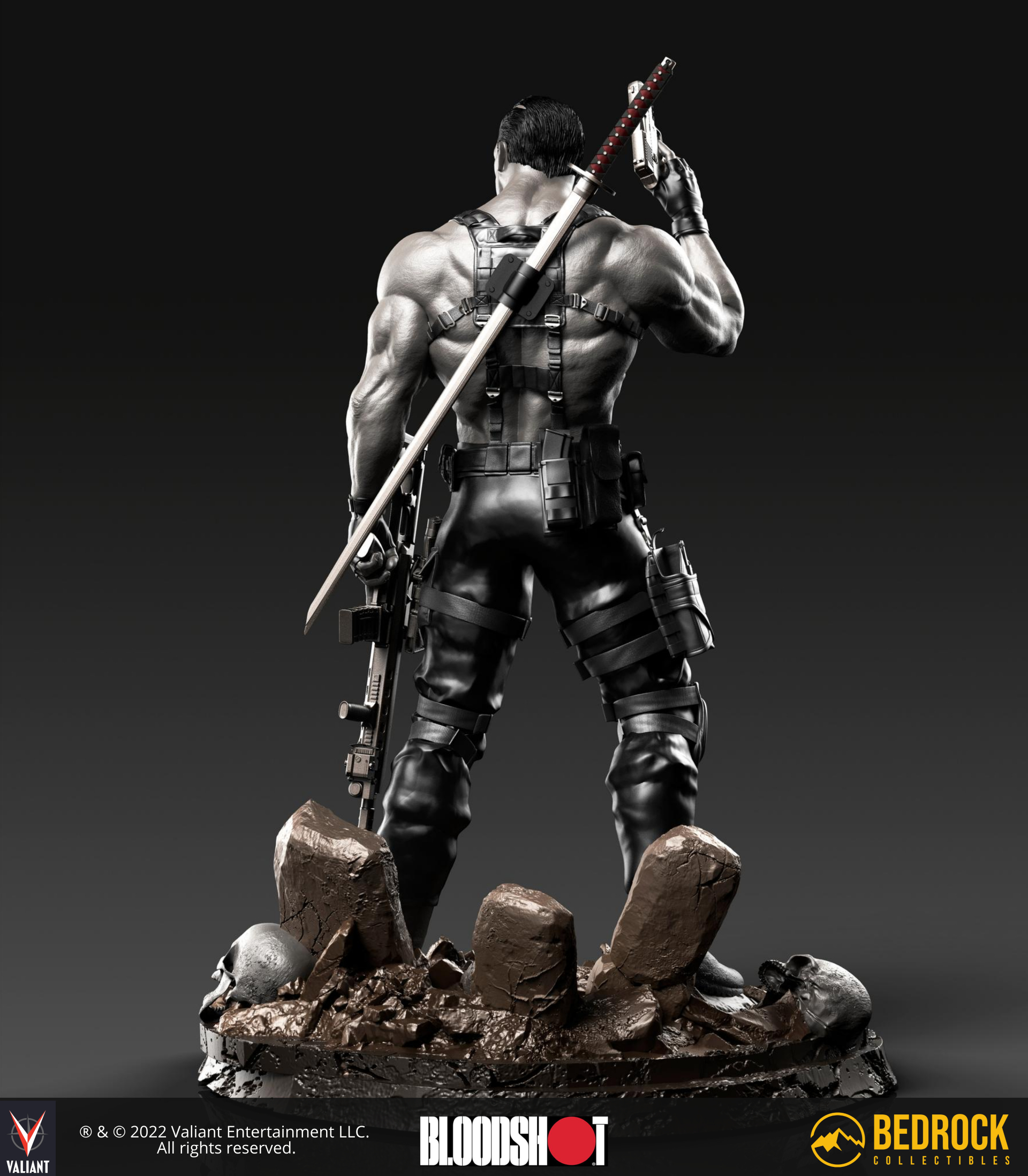 As part of Bedrock Collectibles’ commitment to high-end quality, the 1/4 scale BLOODSHOT statue was sculpted by world renowned 3D artist Caleb Nefzen! Every detail from the skin textures to the facial features to the tactical pouches and gear was sculpted in high fidelity.

“Valiant Entertainment has built a rich history of storytelling and character development. We feel our brand of premium, master painted statues is an art form that strengthens the connection long time fans have with the characters they love,” said Shawn Karawaju, Co-Founder & CEO at Bedrock Collectibles. “Our goal is to bring together iconic Valiant characters as well as new fan favorites and put them, quite literally, on a pedestal for all fans to admire and display proudly in their collections.”

The Year of Valiant is in full swing with this latest super hero team up, giving Valiant fans new ways to show their love and appreciation for their favorite characters. More announcements will be made in the coming months for future characters and even new product lines. 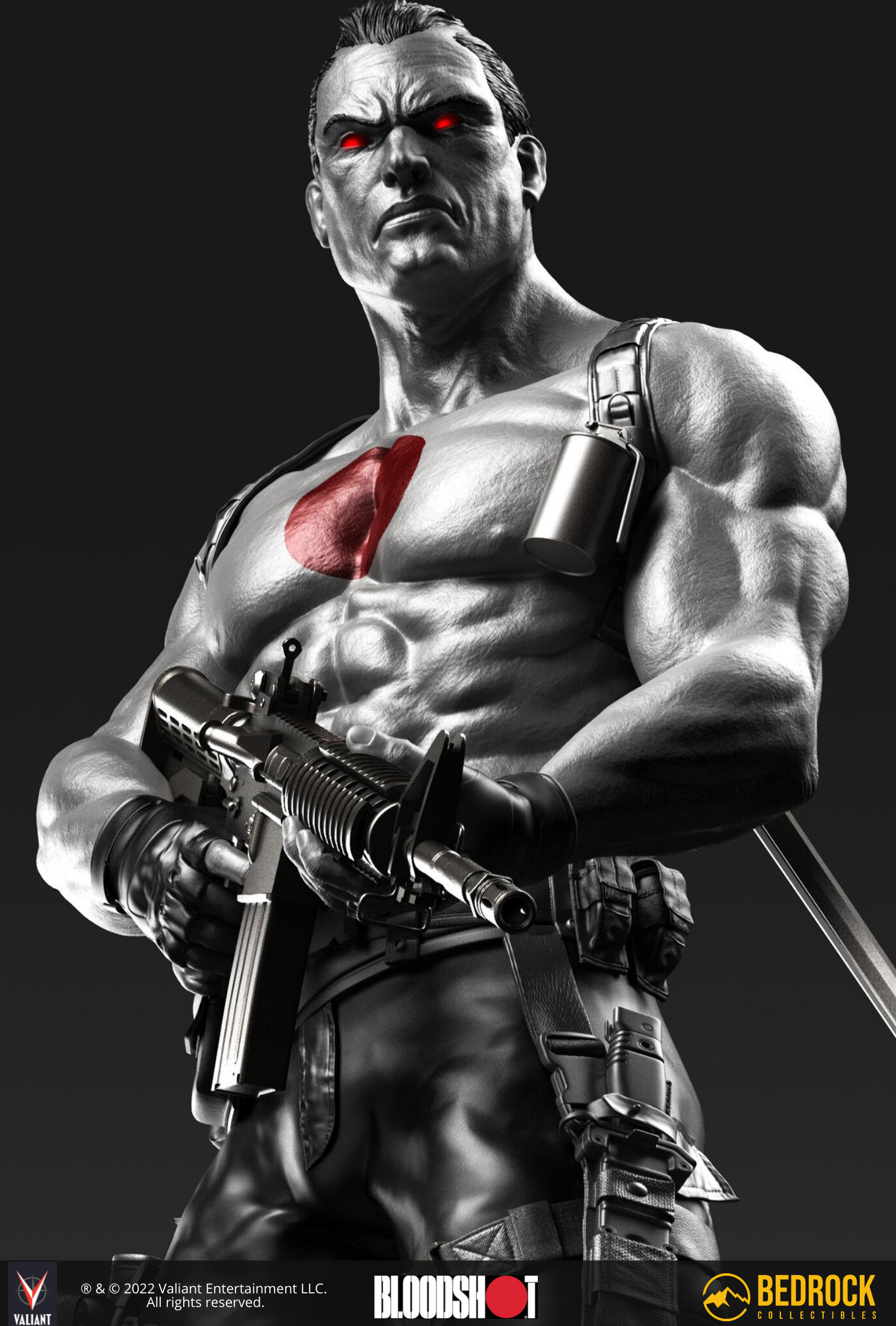 See the 1/4 scale Bloodshot in person for an exclusive first look at Fan Expo Canada 2022 in Toronto, Ontario from August 25-28th at the Metro Toronto Convention Centre and don’t forget to preorder the first Mature Reader series in the character’s history with BLOODSHOT UNLEASHED #1!

In celebration of this announcement, Bedrock Collectibles is offering an early-bird exclusive discounted pre-order price of $679 USD, only available until September 28th. Expected to ship Q1 2023. Pre-order now to secure your spot. 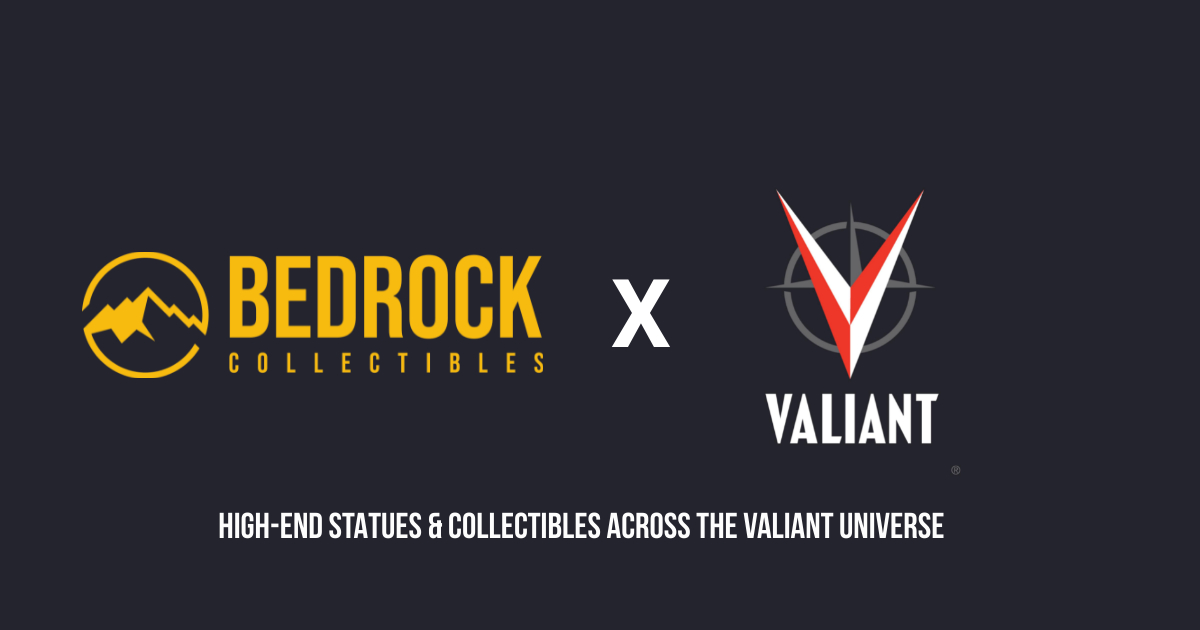 About DMG Entertainment
DMG Entertainment is a global media and entertainment company based in Beverly Hills, CA. Founded by Dan Mintz, the company portfolio has grown to include diverse holdings across film, television, comic book publishing, gaming, and location-based entertainment. Operating as both a production and distribution entity, DMG Entertainment is best known for films such as Looper and Iron Man 3 and the #1 box-office release of Bloodshot feature starring Vin Diesel.

Valiant Entertainment, a subsidiary of DMG Entertainment, founded by Dan Mintz, is a leading character-based entertainment company that owns and controls the third most extensive library of superheroes behind Marvel and DC. With more than 90 million issues sold and a library of over 2,000 characters, including X-O Manowar, Bloodshot, Harbinger, Shadowman, Archer & Armstrong, and many more, Valiant is one of the most successful publishers in the history of the comic book medium. For more information, visit Valiant on Facebook, Twitter, Instagram, and ValiantEntertainment.com. For Valiant merchandise and more, visit ValiantStore.com.

About Bedrock Collectibles
Bedrock Collectibles is a premier licensed producer of high-end, limited edition pop culture collectibles. We specialize in artisan-quality, collectible statues of your favorite characters, sculpted in high-grade polystone resin. To elevate beloved franchises to new heights, we have assembled an all-star team of world class artists, sculptors, master painters, and creative minds, all with the common goal of creating remarkable statues worthy of any centerpiece display. Beyond statues, we expanded our product lines to include premium art toys, busts, fine art prints, and dioramas. As collectors ourselves, we have a strong pulse for the statue and high-end collectibles market, using our expertise to create pieces fans have demanded for years. Bedrock Collectibles is one of the fastest-growing collectibles companies in Canada, with multiple high-profile licenses across major pop culture categories, including comics, movies, TV shows, and video games. We have already signed licensing agreements with some of the biggest names in the industry, including DC, Spin Master, Valiant Entertainment, and many others.