September 21st, 2021 – Valiant Entertainment has partnered with Groupees to announce a brand-new SHADOWMAN inspired bundle with a portion of the proceeds going directly to benefit The Hero Initiative.

Valiant has launched a brand-new Groupees SHADOWMAN build-a-bundle featuring an assortment of exciting opportunities to score great deals on comics, win exclusive prizes and help give back to The Hero Initiative. The Hero Initiative is a nonprofit group which creates a financial safety net for comic creators who may need emergency medical aid, financial support for essentials of life, and an avenue back into paying work. The Groupees SHADOWMAN bundle is live HERE for 3 weeks from September 21st through October 12th.

With this special Groupees SHADOWMAN bundle, fans will be able to build their own unique bundle from a list of over twenty of their favorite Valiant digital comics .

The more titles you add to your bundle the greater the discount! 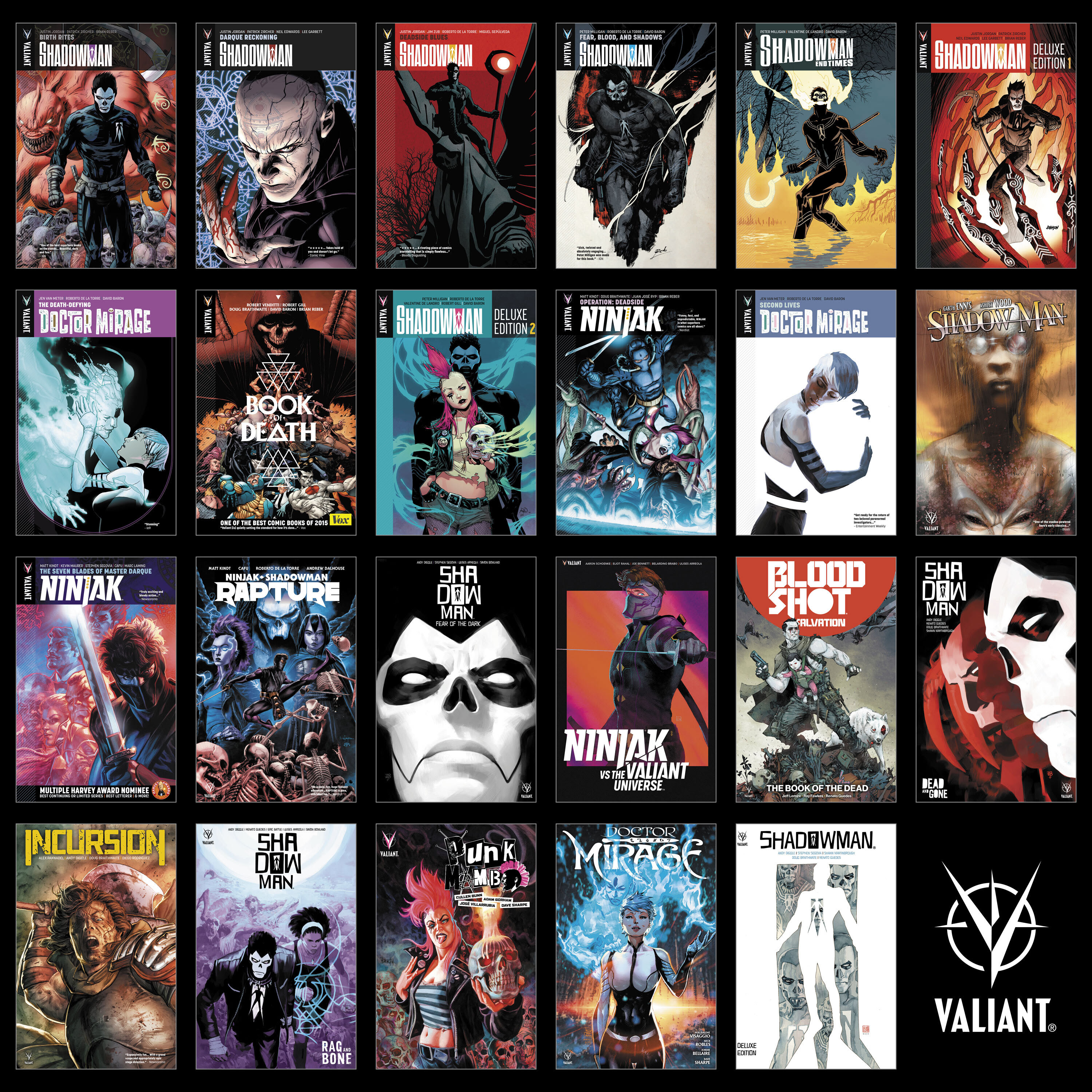 Anyone who purchases a bundle will instantly receive access to a discount code giving 25% off their next purchase at the all new and improved Valiant Store featuring new SHADOWMAN merch like a replica necklace torn from the pages of the comic. Fans who spend over $40 on their Groupees bundle will be given a special grab bag to get $100 worth of assorted Valiant merchandise including pins, t-shirts, hats, mugs and more.

The first 25 contributors who spend over $200 will receive a special limited edition of the Shadowman Classic Omnibus Vol. 1 Hardcover with a sketched bookplate from series artist Bob Hall! 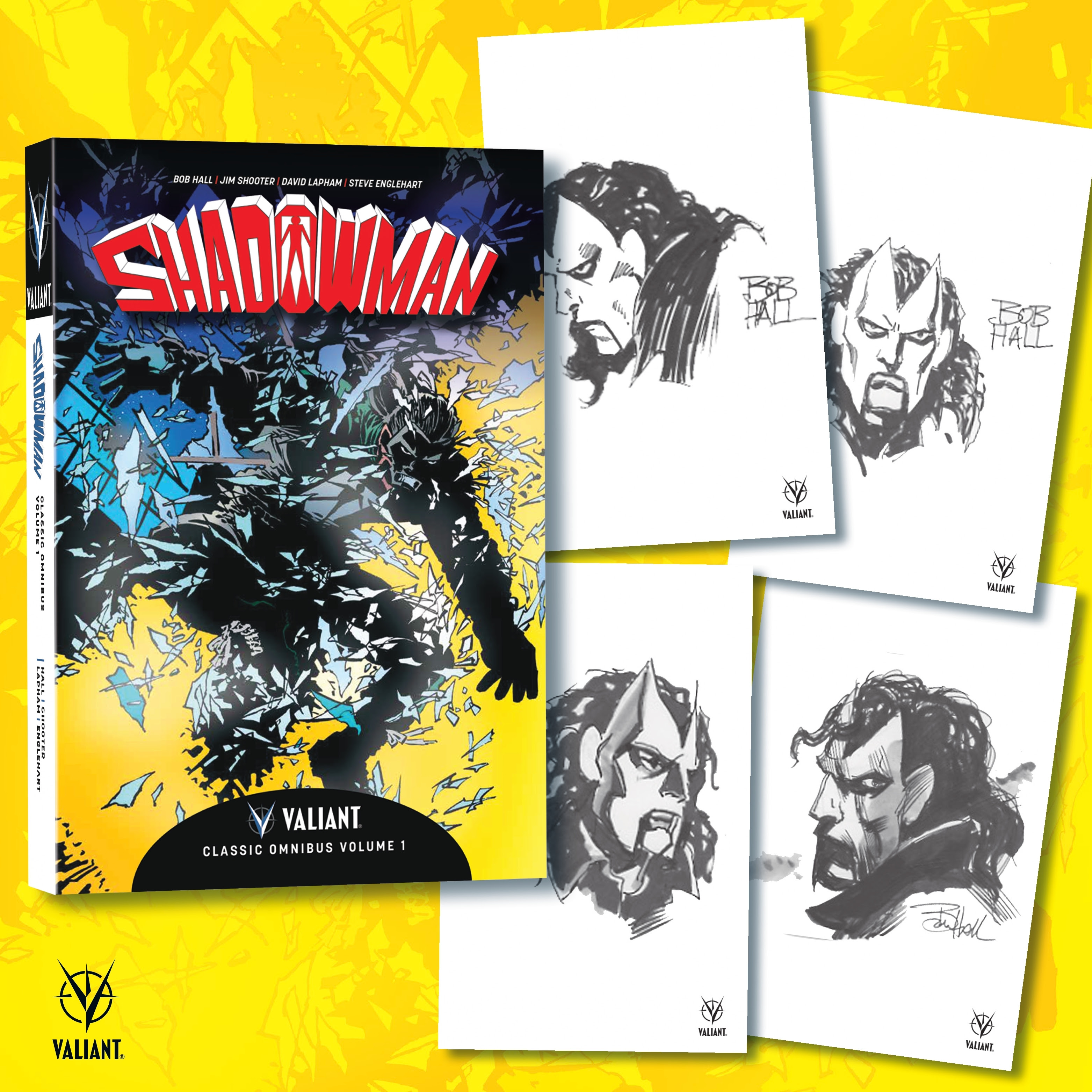 There will also be tiered rewards for the TOP 5 contributors to the Groupees SHADOWMAN bundle as well. Top contributor prizes include limited edition, out of print, and unique one-of-a-kind exclusive incentives that are sure to excite both new and longtime fans alike such as a print copy of the classic Shadowman #1 from 1992, a limited edition Shadowman print by Tony Moore signed by Shadowman series writer Cullen Bunn, a copy of Shadowman (2021) #1 Black Glass variant signed by Cullen Bunn and even an original commissioned Shadowman sketch from Shadowman artist Stephen Segovia. 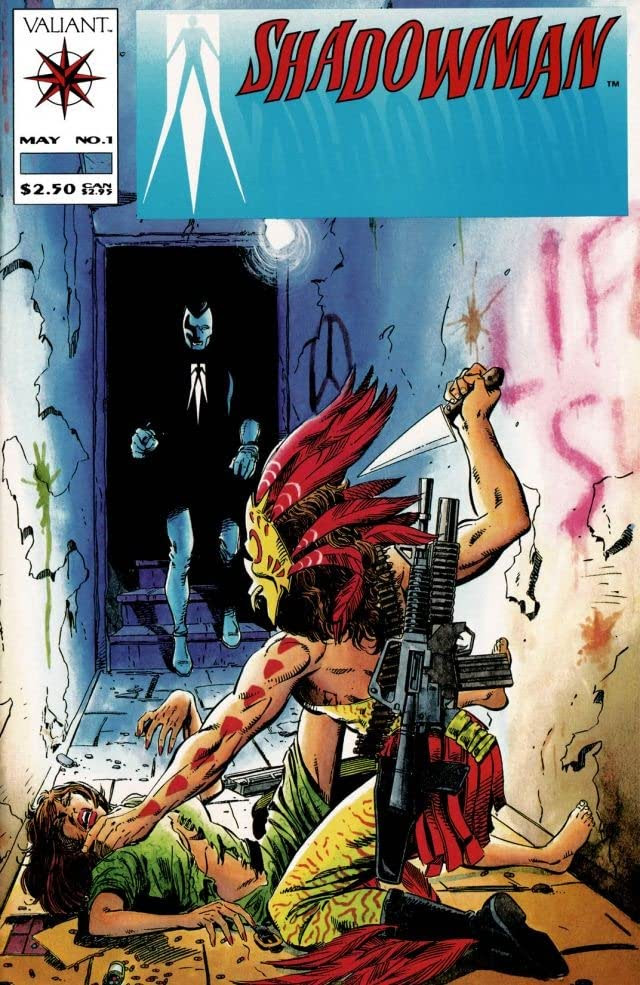 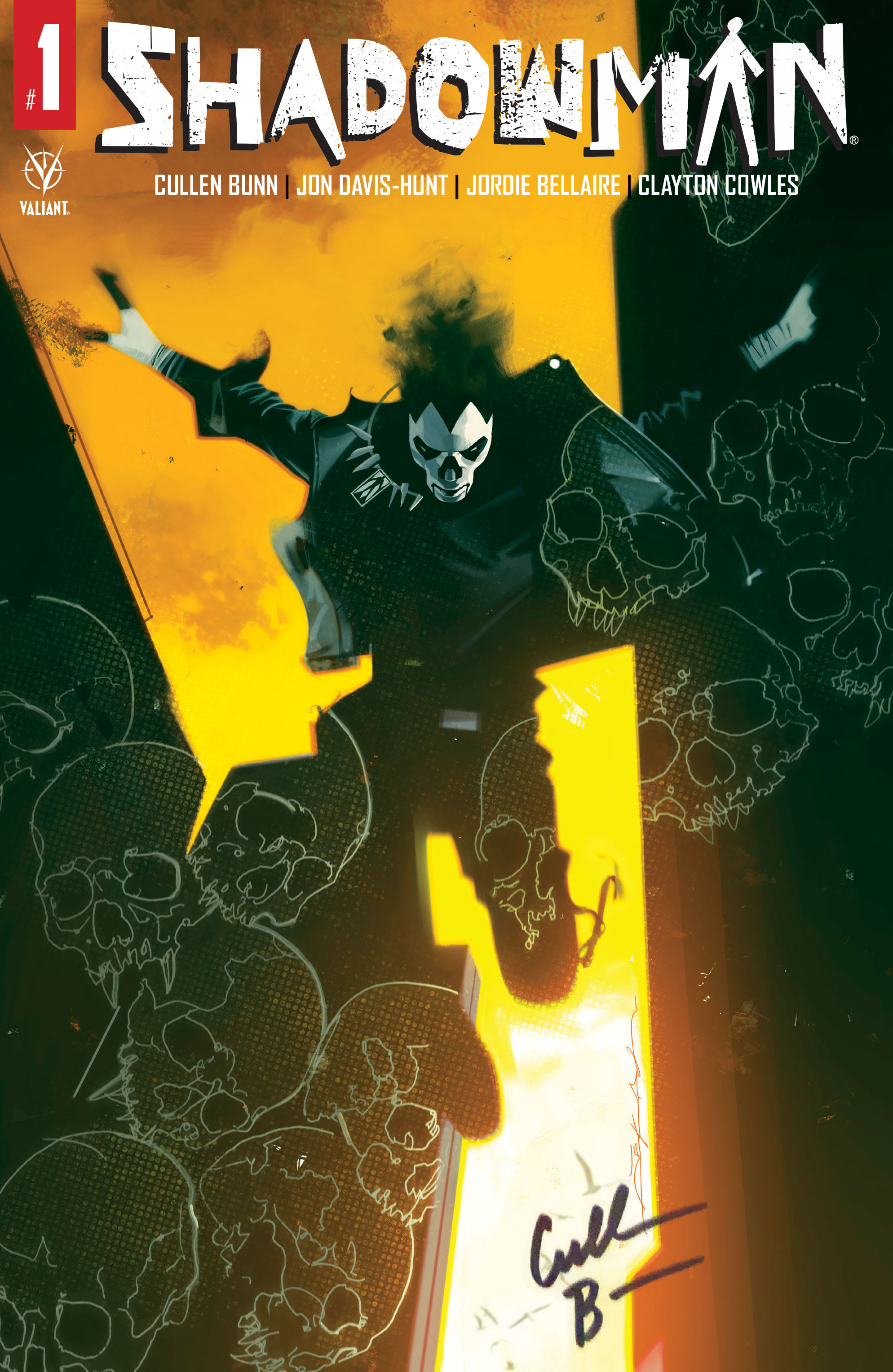 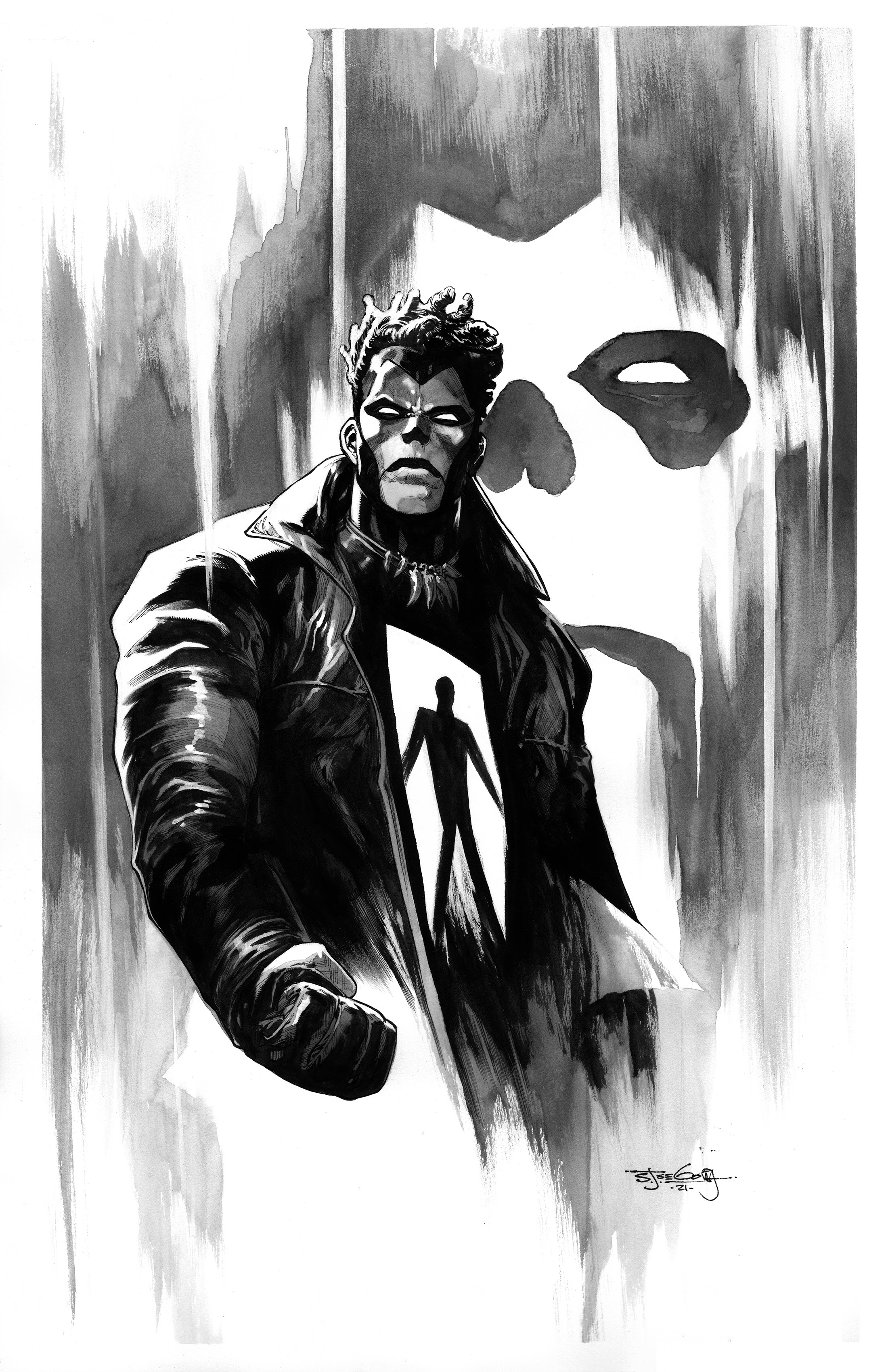 Show your support for the Hero Initiative and buy a digital build-a-bundle from a selection of the complete library of SHADOWMAN trades HERE including nearly every crossover appearance from September 21st through October 12th. With access to special discounts at the Valiant Store plus an array of limited edition, out of print, and unique one of a kind prizes for the TOP 5 contributors, this is one bundle fans won’t want to miss.

About Valiant Entertainment
Valiant Entertainment, a subsidiary of DMG Entertainment, founded by Dan Mintz, is a leading character-based entertainment company that owns and controls the third most extensive library of superheroes behind Marvel and DC. With more than 80 million issues sold and a library of over 2,000 characters, including X-O Manowar, Bloodshot, Harbinger, Shadowman, Archer & Armstrong, and many more, Valiant is one of the most successful publishers in the history of the comic book medium. For more information, visit Valiant on Facebook, Twitter, Instagram, and ValiantEntertainment.com. For Valiant merchandise and more, visit ValiantStore.com

About Groupees
Groupees is an online platform for exclusive flash sale deals of digital media, including games, comics, ebooks and music, with real-time social features so users can share their passions with like-minded people from around the World. Based in Portland, OR, USA, the Groupees team spans continents and includes passionate professionals with backgrounds in games, music, social media and technology.

About The Hero Initiative
The Hero Initiative is the first-ever federally chartered not-for-profit corporation dedicated strictly to helping comic book creators in need. Hero Initiative creates a financial safety net for yesterday’s creators who may need emergency medical aid, financial support for essentials of life, and an avenue back into paying work. It’s a chance for all of us to give back something to the people who have given us so much enjoyment. Since its inception, The Hero Initiative has had the good fortune to grant over $1 million to the comics’ veterans who have paved the way for those in the industry today. For more information, visit www.heroinitiative.org or call 626-676-6354.