THE HARBINGER #1 ARRIVES IN 2021 FROM
ROBBI RODRIGUEZ, JACKSON LANZING, AND COLLIN KELLY 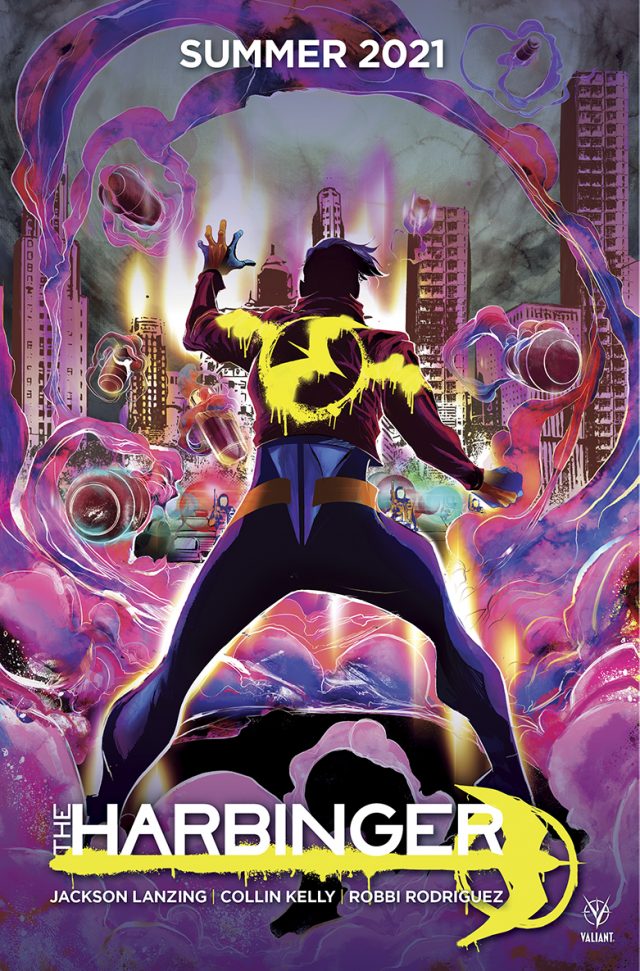 October 5th, 2020 – Ahead of the feature film that’s in development at Paramount, Valiant Entertainment is incredibly proud to reveal the vivid new direction that will kick off next summer with THE HARBINGER #1.

Co-written by JACKSON LANZING and COLLIN KELLY (Green Arrow, Gotham City Garage) and featuring art by ROBBI RODRIGUEZ (Spider-Gwen, Batgirl), the upcoming series introduces new readers to Peter Stanchek, the most powerful telepath on the planet, and the sole being capable of activating powers in others like him. THE HARBINGER will trace Peter’s path from the most feared man in the world to one of its greatest protectors. This character-driven journey will introduce new allies, new villains, new costumes, and a new meaning for the title of Harbinger.

Despite having immense superpowers, Collin believes that Peter’s story is incredibly human and reminds us that we always have the potential to be better. “Like many of us, Peter has made mistakes. People have been hurt. We have no interest in ignoring that part of the character’s history.” The co-writer added, “By acknowledging those mistakes and taking responsibility for them, Peter will become the person – and the hero – he has always had the potential to be. Peter Stanchek will be more than a hero; he will be a harbinger for the world we want to see.”

“THE HARBINGER is the next big step forward in the Valiant Universe and Peter Stanchek’s promised rebirth as a hero, a leader, and a revolutionary,” said Jackson. “It’s unapologetic in its politics, diverse in its cast, and intimate in its drama. Collin and I love to tell stories that balance character deconstruction and social analysis, and there’s no one in comics who needs a little deconstruction and social awareness more than Peter.”

“When Collin, Jackson, and I first started mapping out this project, we weren’t expecting the themes we are tackling to be as relevant in our own lives as they have become,” stated Robbi. “As we see everyone facing more each day, people can feel a change is coming. It makes it all the more fitting that it’s called ‘Harbinger’, the herald of change.”

THE HARBINGER #1 arrives in Summer 2021. For more information, visit The Hollywood Reporter, and keep an eye on ComicBook.com, Screen Rant, CBR, and AIPT for additional interviews and artwork throughout the week.