September 22nd, 2021 – Valiant continues to look towards the future by promoting Gregg Katzman to Director of Marketing & Publicity. 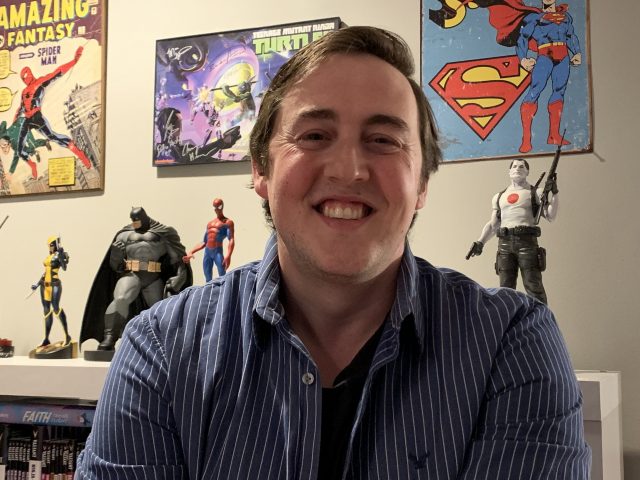 As the Director of Marketing & Publicity, Gregg Katzman will continue to utilize nearly a decade of experience in comics press to help shape the future of the Valiant Universe in announcement strategies, internal feedback on everything from covers to stories, and so much more.

Since joining the company in 2018 as the Marketing Coordinator followed by his role as the Marketing Manager and then Marketing & Publicity Manager, Gregg has remained focused on expanding Valiant’s outreach through building and maintaining authentic press and fan relationships to elevate Valiant’s legacy in the industry. With a B.A. in Communications from the University of Hartford and two years serving as the Marketing & Events Manager at Midtown Comics, Gregg will help pave the way for an ambitious 2022 slate of epic new stories all working together within the iconic shared Valiant Universe.

With the upcoming launch of THE HARBINGER on October 27th and the return of SHADOWMAN in January, readers can expect a heightened focus on flagship and fan-favorite characters moving forward. “As a Valiant fan who has been proudly promoting the comics since 2012, this really is a dream job,” said Gregg. “I recognize just how incredibly lucky I am to have this opportunity and I will continue to do my best to make sure we’re always thinking of the fans first, while also welcoming newcomers to explore one of the best shared universes in comics. I am sincerely very excited about the plans for 2022, and I can’t wait to get the word out in the coming months. Stay tuned and thank you for staying Valiant.”

Publisher Fred Pierce understands the strengths Gregg brings to the team as well. “It’s great having Gregg on the Valiant team and his new position is well deserved,” said Fred. “Gregg is a true lover of the Valiant Universe and always puts the fans first. Our press coverage is ever stronger which means that more and more people are enjoying the Valiant Universe. In a world that often seems insane, Gregg lifts everyone around him up. I continue to look forward to working with him every day.”

Look for Valiant comics at a comic shop near you and more developments will be revealed soon about the Valiant Universe in 2022.