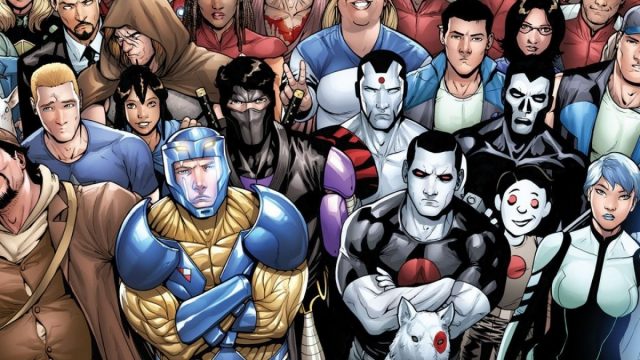 Before Paramount’s HARBINGER movie hits the big screen next year, the “Valiant Heads to Hollywood” virtual panel will be a must-watch event for comic fans as it explores all that the critically-acclaimed publisher has to offer! The panel will delve into a currently classified new series and its vivid new take on a classic Valiant team. Plus: many other secrets and fresh artwork will be revealed.

Moderated by Tiffany of YouTube’s ComicPOP, she’ll be joined by the co-writers of the top-secret new series, plus NINJAK writer Jeff Parker, X-O MANOWAR writer Dennis “Hopeless” Hallum, and Senior Editors Lysa Hawkins and Heather Antos for a can’t-miss discussion on Valiant’s upcoming comics and more.

Before Paramount’s HARBINGER movie hits the big screen in 2021, learn all about Valiant Entertainment’s upcoming comic [CLASSIFIED] and witness this bold new take on the classic franchise. Plus, exclusive reveals from NINJAK, BLOODSHOT, X-O MANOWAR, RAI, and more!

Moderated by Tiffany of YouTube’s ComicPOP, join writers [CLASSIFIED], [CLASSIFIED], Jeff Parker, Dennis “Hopeless” Hallum, and Senior Editors Heather Antos and Lysa Hawkins for an exclusive look at the future of the Valiant Universe and its must-read new comics.

Stay safe and stay Valiant, everyone.