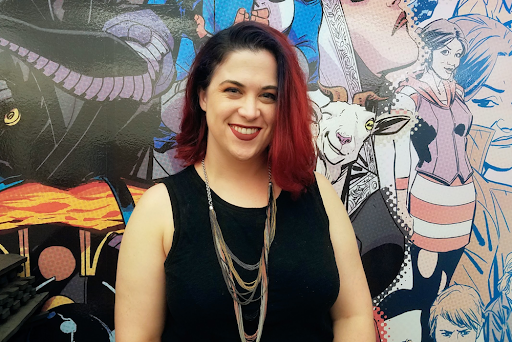 As part of our Virtual Valiant HQ Fridays, we wanted to give everyone an opportunity to get to know the folks behind the scenes here at Valiant HQ. This week, we sat down with Digital Marketing Manager, Emily Hecht, to ask about interacting with fans, getting her start in the industry, and why it’s so hard to pick a favorite comics character.

Valiant: What does the Digital Marketing Manager do?

Emily Hecht: Basically, I’m Valiant’s online communicator — most of my time is spent making content, planning marketing strategy, and interacting with fans on Twitter, Facebook, Instagram, Youtube and email. However, Valiant is a small team (and we do most things in-house) so I’m always being added in to other projects, too! I especially love when I get to go to conventions, host panels, and help staff the con booth. My entire job is communicating with fans, which I love to do digitally and in person.

EH: It was completely coincidental! I’d been working at a comic shop and as a convention assistant for artists…but I met Matthew Klein (VP of Sales & Marketing) while volunteering with a friend of his for a tutoring program in Brooklyn and he happened to stop by for lunch. We talked comics, he mentioned Valiant had a part-time sales opening, and now I’m here!

EH: May “Mayday” Parker! I didn’t have a regular comics habit as a kid, but I had a huge stack of Archie Digests and a few well-loved single issues that had somehow found their way onto my bookshelf. The one I read and reread constantly was What If… #105, which imagined a world in which May had been able to grow up raised by Peter and MJ. She’s such a great combo of determination and teenager-y snark and the pure joy of being a Spider-person.

EH: Oh, good question! If I’m thinking about Valiant characters, then definitely it’s Toyo Harada. The complexity of his motivations, the combination of epic sci-fi and intimate moments, the insanely cool cast of characters that surrounds him…he’s got everything I’m looking for in a character and more, so it kind of blows my mind that he doesn’t get more love in the wider comics world.

As for non-Valiant characters? Listen, I know he’s already pretty popular, but he is my all-time favorite and so I would like the Winter Soldier to be EVEN MORE popular. The most popular of all.

EH: I honestly don’t know how to answer this — it changes constantly. It’s like picking a favorite child. Today? Hmmm, today’s an Alyssa Myles day. Tomorrow’s probably an Archer day, and then Owen Cho the day after…

EH: Consequences. Valiant’s characters are people with powers, not superheroes, so for the most part (except for Faith, who is a perfect angel and I will hear no argument) they’re deeply flawed and they make BIG mistakes. And our books don’t reset, they don’t make it easy for those characters to fix their mistakes or forget about them, so their journeys are really meaningful.

EH: SHADOWMAN! With the endlessly cool aesthetics, the episodic horror vibes, and the gory monsters? When I have such a strong theme to work with and such amazing images to share, it makes my job super easy!

EH: The people! Amazing, funny, smart coworkers…delightful creators and collaborators…and most importantly, the wonderful Valiant fans. I feel very lucky to be part of this community.