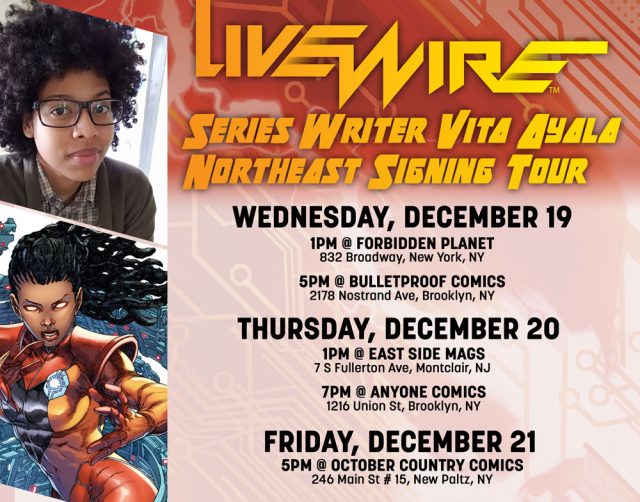 Valiant is proud to announce a series of in-store creator signings for LIVEWIRE #1, the first issue in a stunning new ongoing series by writer Vita Ayala (Supergirl) and artists Raúl Allén and Patricia Martín (SECRET WEAPONS)!

Beginning on December 19th, up-and-coming comic writer Vita Ayala is scheduled to sign copies of their Valiant debut, LIVEWIRE #1, in local comic book stores all across the greater New York City area, including the following locations:

Plus: Before LIVEWIRE #1 arrives in stores this winter, make sure you tell your local comic shop that you want the LIVEWIRE #1-8 PRE-ORDER EDITION BUNDLE, featuring trade paperback-style extras, bonus content, and exclusive covers by a host of amazing artists – beginning with Paulina Ganucheau (The Unbelievable Gwenpool) – all for no extra cost! The deadline is fast approaching, so reserve yours before the final order cut-off date of November 26th, 2018!