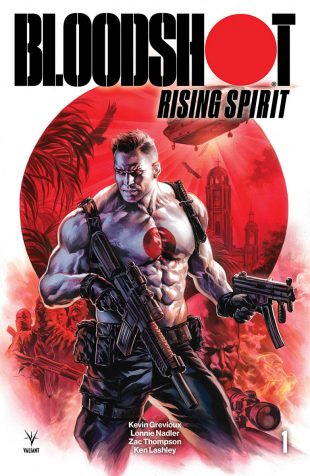 As first revealed at Inverse, Valiant is proud to present your first lettered and colored look within the pages of BLOODSHOT RISING SPIRIT #1, the first issue of an unstoppable new series that will forever redefine the origins of Valiant’s most unrelenting hero!

“One of the things I don’t like is when writers come in and say, ‘Everything you thought you knew before was wrong,’” writer Kevin Grevioux told Inverse. “I think that’s a slap in the face to both the creator and to longtime fans who’ve been with the character since inception. However, I do think you can enhance and add layers to the history without disturbing the essence of who the character is and what makes him tick. And that’s what we’ll be doing with RISING SPIRIT.”

Attention, retailers: There’s still time to qualify to receive the ultra-limited BLOODSHOT RISING SPIRIT #1 Glass Variant, on which artwork by superstar creator Doug Braithwaite (Justice) will be printed via a special multi-colored process on a solid pane of glass! Please contact Valiant’s dedicated sales team at sales@valiantentertainment.com to learn more!

Plus, don’t forget, fans: The BLOODSHOT RISING SPIRIT #1-8 PRE-ORDER EDITION BUNDLE is also still available to reserve until the final order cut-off (FOC) date of October 22nd, 2018 – packed with trade paperback-style extras and bonus content, plus exclusive covers by renowned artist Ken Lashley – all for no extra cost! No more copies will be made available beyond that date and subsequent issues will not be offered in later solicitations!