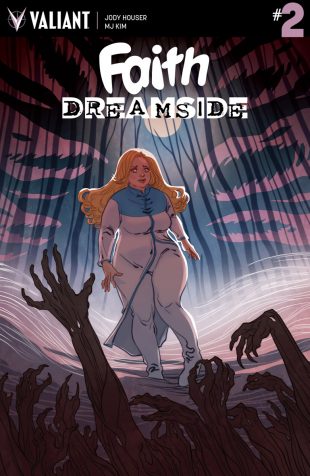 As first revealed at The Beat, Valiant is proud to present a first look within the pages of FAITH: DREAMSIDE #2, the second issue of the BRAND-NEW MINISERIES by writer extraordinaire Jody Houser (Stranger Things, Mother Panic) and MJ Kim (FAITH’S WINTER WONDERLAND SPECIAL #1)! On October 31st – just in time for Halloween – prepare yourself for a fright unlike any other, as Faith and Doctor Mirage team up to investigate the unknown!

Plus, in stores now: Don’t miss the premiere issue of this fantastic and phantasmagorical new miniseries with FAITH: DREAMSIDE #1, continuing the adventures of the high-flying icon that Uproxx calls “A joy to read!”