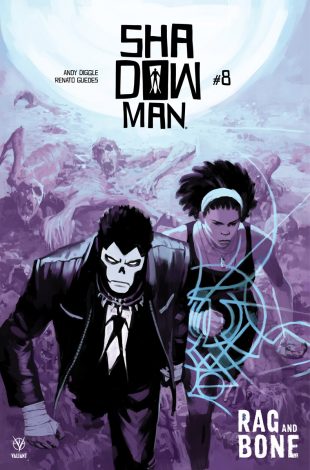 On October 24th, Diggle and Guedes join forces once again after a prehistoric two-parter of epic proportions in SHADOWMAN #6 and SHADOWMAN #7, this time bringing Jack Boniface back to the present for a new threat that bears a familiar face…

The endless cycle of death and rebirth stops here as Shadowman and the Darque clan usher in the reckoning they’ve waited 10 lifetimes to achieve – with massive repercussions for the future of the Valiant Universe – as renowned writer Andy Diggle and dazzling artist Renato Guedes heed the call of SHADOWMAN (2018) #8! Featuring covers by Tonci Zonjic (Lobster Johnson), Keron Grant (Iron Man), Ryan Bodenheim (X-O MANOWAR, The Dying & The Dead), and Ryan Lee (A&A: THE ADVENTURES OF ARCHER & ARMSTRONG)!