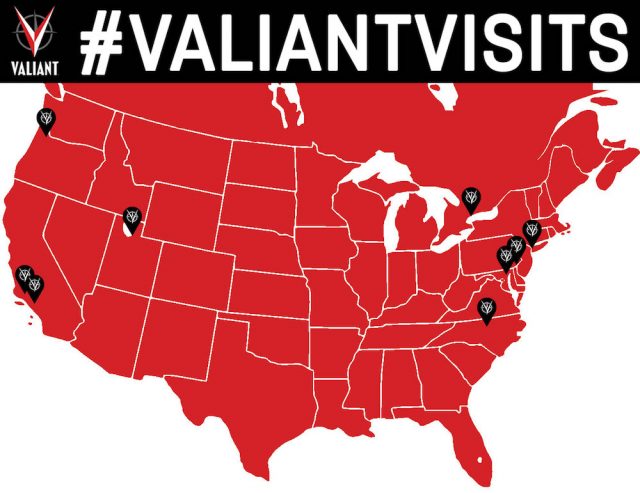 Valiant is ecstatic to announce the next phase of its celebrated retailer outreach program: #ValiantVisits, a new campaign meant to propel the publisher’s many local retailer partners into the public spotlight!

Valiant prides itself on being the publisher with a personal touch, and every year, roving representatives from Valiant’s sales team visit, on average, over 100 different retailers nationwide. With the new #ValiantVisits initiative, the company will join forces with even more shops to let fans know where they can go to get their fix of one of the biggest and most critically acclaimed superhero universes in comics!

Starting in Toronto with Fan Expo Canada this weekend from August 30th to September 2nd, Valiant will be expanding its time-honored practice of visiting local comic stores across the continent with an extensive slate of visits at over 30 different locations during nine upcoming comic conventions, including:

Plus, store announcements are also coming soon for the following conventions:

By checking out the hashtag #ValiantVisits, comic fans will be able to track the publisher’s sales representatives as they journey from shop to shop, speaking with local retailers about their business and offering exclusive Valiant swag to employees and customers alike!

Retailers, take note: Valiant is now accepting #ValiantVisits inquiries from now through 2019! If you’re interested in bringing Valiant to your local comic shop, whether as part of a local convention or for an individual visit, please reach out to a member of the sales team at sales@valiantentertainment.com.

We’ll see you on the road!