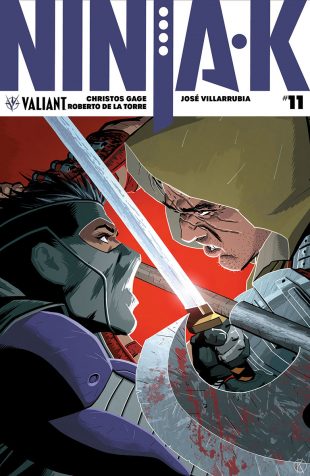 As revealed at Comic Book Resources, Valiant is proud to present your first look at NINJA-K #11, the FIRST ISSUE in a BRAND-NEW STORY ARC and a striking new jumping-on point for the EXPLOSIVE ONGOING SERIES from renowned writer Christos Gage (Netflix’s Daredevil) and dynamic artist Roberto de la Torre (THE DEATH-DEFYING DOCTOR MIRAGE)! On September 12th, “FALLOUT” begins as NINJA-K accepts a new mission: tracking down the Eternal Warrior’s body!

This fall, jump on board an all-new adventure and discover why fans and critics can’t get enough of Valiant’s sensational super-spy thriller:

““✮✮✮✮… One of the jewels in Valiant’s very bedazzled crown. Miss this and miss out on a great action comic.” – Graphic Policy

“✮✮✮✮… This is the knock-down drag-out fight you’ve been waiting for.” – Comicbook.com