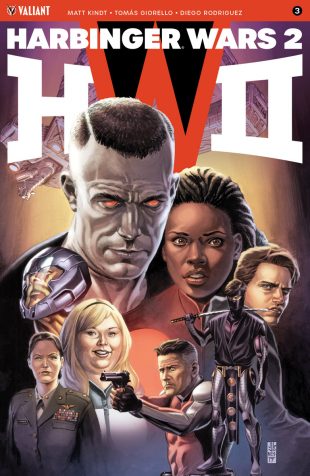 As first revealed at Comicosity, Valiant is proud to present your first look within the pages of HARBINGER WARS 2 #3 (of 4), the next incendiary installment in the SEISMIC COMICS EVENT OF 2018! On July 25th, Eisner-nominated writer Matt Kindt (X-O MANOWAR, DIVINITY) and sensational artist Tomás Giorello (X-O MANOWAR, NINJA-K) rush past the point of no return and deliver another unstoppable onslaught upon the heroes of the Valiant Universe!

But first: Get caught up and dive into the fray with HARBINGER WARS 2 #2 (of 4)! In stores today, X-O Manowar is unleashed on a world he thought he’d left behind, as New York Times best-selling author Matt Kindt and superstar artist Tomás Giorello fire off the next brutal volley in the coast-to-coast clash of comics icons that will leave no hero unscathed – featuring covers by J.G. Jones (Wanted), Mico Suayan (BLOODSHOT SALVATION), Juan José Ryp (NINJA-K), and Felipe Massafera (Green Lantern: Emerald Warriors)!