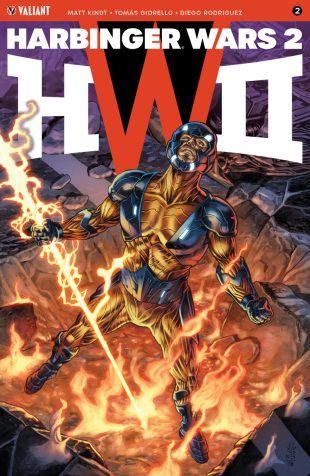 As revealed today at Comic Book Resources, Valiant is proud to present your first look at the lettered pages for HARBINGER WARS 2 #2 (of 4), the SEISMIC CROSSOVER EVENT OF 2018! On June 27th, the Earth-shattering crossover continues in full force with another epic chapter, as Eisner-nominated writer Matt Kindt (X-O MANOWAR, ETERNITY) and superstar artist Tomás Giorello (X-O MANOWAR) unleash X-O Manowar on a world he thought he’d left behind…and fire off the next brutal volley in the coast-to-coast clash of comics icons that will leave no hero unscathed!

Before jumping into the fray on June 27th, find out why HARBINGER WARS 2 #1 – available in local comic shops NOW! – has enthralled fans, critics, and new readers alike as the biggest, most ambitious, and most consequential event Valiant has ever attempted:

“★★★★★… Loaded with action and emotion. If you read one event this year, it needs to be HARBINGER WARS 2.” – All-Comic

“★★★★½… Bursts from the gate with a lot of momentum, and with a distinct and interesting visual style that makes this comic stick out from the pack.” – Newsarama

“★★★★½… A well-written, wonderfully-illustrated issue that is surprisingly accessible and enjoyable for new and long-time readers alike.” – The Brazen Bull