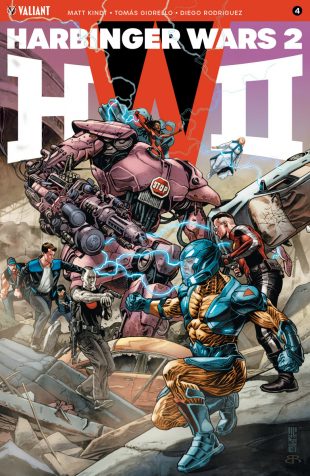 Valiant is proud to present your first look at the covers for HARBINGER WARS 2 #4 (of 4) – an unstoppable pulse-pounding climax in the SEISMIC SIX-PART CROSSOVER EVENT that will wreak havoc across the landscape of the Valiant Universe! On August 29th, it all ends here as Eisner Award-nominated writer Matt Kindt (X-O MANOWAR, ETERNITY) and superstar artist Tómas Giorello (X-O MANOWAR) bring the cataclysmic showdown to an unforgettable, heart-stopping conclusion… and when the dust settles, nothing will be the same!

Now, the long-brewing battle between Valiant’s greatest icons will finally reach the stratosphere – literally – and, out of the ashes, a new order for the Valiant Universe will be hewn as New York Times best-selling writer Matt Kindt and comics juggernaut Tomás Giorello present the MUST-READ comics showdown of 2018! On August 29th, no one gets out unscathed in HARBINGER WARS 2 #4 – featuring covers by J.G. Jones (Final Crisis), Mico Suayan (BLOODSHOT SALVATION), Juan José Ryp (BRITANNIA), Felipe Massafera (Planet of the Apes/Green Lantern)!

But first! Jump on board the astonishing first issue of HARBINGER WARS 2 when it descends on comic book stores everywhere this month on May 30th! This summer, the most anticipated event in Valiant’s publication history begins in full force as Matt Kindt and Tomás Giorello crack the Valiant Universe in two in HARBINGER WARS 2 #1 (of 4)!

In the East, one of the most powerful minds on Earth, Peter Stanchek, is leading his band of Renegades across the country, activating any potential psiots willing to join them, and building an insurrection force of ultra-powerful and unwieldy new abilities that will soon bring war to Omen’s doorstep…and the unstoppable force known as X-O Manowar raging back to Earth.