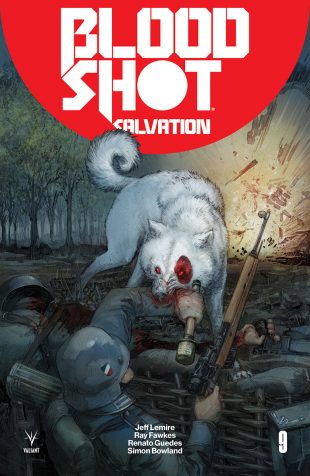 As revealed today at Comics Bulletin, Valiant is proud to present your first look inside BLOODSHOT SALVATION #9 – a stunning STANDALONE ORIGIN STORY featuring the never-before-seen history of the indestructible mammalian machine known as Bloodhound! On May 16th, New York Times best-selling writer Jeff Lemire (The Terrifics, Black Hammer), Eisner and Harvey Award nominee Ray Fawkes (Batman: Eternal), and astonishing artist Renato Guedes (X-O MANOWAR) combine their talents for a one-shot issue witnessing the birth of Project Rising Spirit’s Bloodshot program – and the canine weapon of untold destruction they unleashed upon the war to end all wars!

Then: Jump on board with the next sensational story arc in Jeff Lemire’s Eisner Award-nominated superhero saga with BLOODSHOT SALVATION #10, as Ray Garrison’s salvation-seeking odyssey from America’s darkest corners and through the Deadside to secure his daughter’s safety reaches forward – and past the point of no return! On June 13th, visionary writer Jeff Lemire and incendiary artist Doug Braithwaite (X-O MANOWAR, Journey into Mystery) return to the far, far future for the ultimate meeting of man and machine!