From East to West, the nation has been cleaved down the middle as Livewire’s defensive attack on the U.S. power grid envelops America in darkness and sets the stage for the biggest clash of powers ever witnessed… On one side, Peter Stanchek’s ragtag team of Renegades – alongside their newly activated army of untrained and wildly unstable psiots – ready themselves for an unsparing firefight with H.A.R.D. Corps and the agents of Omen. On the other, Ninjak and Bloodshot prepare to enter Livewire’s domain inside blacked-out Los Angeles. But as the casualties pile up and the losses mount on both sides, none of them will be ready to confront the full fury of raw power personified as X-O Manowar makes his long-awaited return after a year of self imposed exile among the stars…and delivers a single concussive strike that will send shockwaves across the whole of the Valiant Universe!

In the shock-inducing aftermath of “FEAR OF THE DARK,” master storyteller Andy Diggle (Green Arrow: Year One) leads a rotating cast of superstar artists – including Shawn Martinbrough (Thief of Thieves), Doug Braithwaite (Justice), and Renato Guedes (Wolverine) – to reveal the full scope and power of the Shadowman mythos…and how three of its forgotten champions stoked its earliest embers…with a legend-fueled odyssey into eons past as “DEAD AND GONE” tells all!

The SHADOWMAN #4-11 PRE-ORDER EDITION BUNDLE–eight 40-page, massively expanded editions of Shadowman’s next stunning story arcs, “DEAD AND GONE” and “RAG AND BONE” – can only be ordered as a set and must be reserved with your local comic shop by the initial order date of April 26, 2018! Released monthly from June 2018 through January 2019, each PRE-ORDER EDITION comes packed with trade paperback-style extras and bonus content, including creator commentary, behind-the-scenes looks at the creation of the comics, process character designs and artwork, and first looks at upcoming issues – plus exclusive covers by Hannah Fisher (Tomb Raider) that can’t be found anywhere else!

The only way to obtain these exclusive items is to pre-order all eight issues with your local comic shop by the initial order date of April 26th, 2018! No more copies will be made available beyond that date and subsequent issues will not be offered in later solicitations!

From superstar writer Jeff Lemire (The Terrifics, Black Hammer) and artistic powerhouse Doug Braithwaite (X-O MANOWAR, Journey into Mystery), Valiant’s Eisner Award-nominated superhero saga goes back to the far, far future for the ultimate meeting of man and machine at the crossroads of tomorrow and today!

With HARBINGER WARS 2 seizing America, Livewire has rendered the nation’s power grid useless in a last-ditch attempt to shield her psiot allies. The people of Washington D.C. need someone to save them – and so do Quantum and Woody! Now that the high-tech wristbands that keep their atoms stabilized have become nothing more than fashion accessories, the world’s worst superhero team is going where no one has gone before… Into the atomic realm!

Do not attempt to adjust your eyeballs because red-hot rising star Eliot Rahal (The Paybacks) and fan-favorite artist Francis Portela (FAITH) are taking things from zero to Dada as Quantum and Woody tie into, outside of, and in between Valiant’s seismic summer event!

Class is in session as Valiant’s all-ages escapade escalates!

Get ready for second period as rising star Daniel Kibblesmith (QUANTUM AND WOODY!, The Late Show With Stephen Colbert) and Eisner Award-winning artist Derek Charm (Jughead) detail another hysterical day in the life of the world’s most talented teenagers, in an incredible all-ages adventure set outside of Valiant’s standard superhero continuity! 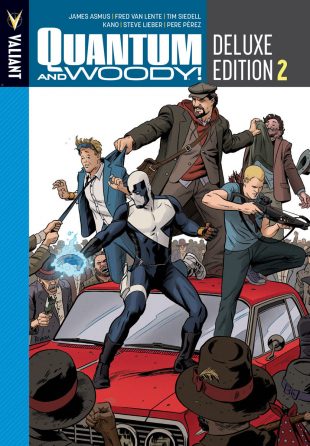