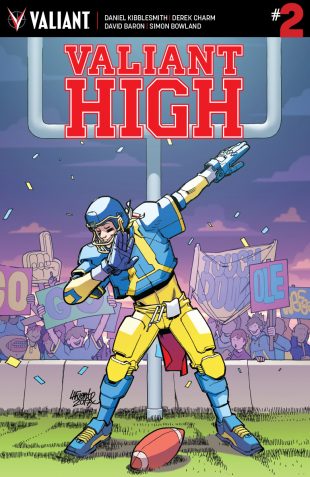 As first revealed at Freaksugar, Valiant is proud to present your first look inside VALIANT HIGH #2 (of 4), the second issue of AN UPROARIOUS, ALL-AGES ESCAPADE from rising star Daniel Kibblesmith (QUANTUM AND WOODY!, The Late Show with Stephen Colbert) and Eisner Award-winning artist Derek Charm (Jughead, Star Wars Adventures)! On June 6th, class is in session as the most powerful heroes of the Valiant Universe return to high school for a hair-raising, all-ages adventure that’s perfect for new readers!

On June 6th, get ready for second period as Daniel Kibblesmith and Derek Charm detail another hysterical day in the life of the world’s most talented teenagers, in an incredible all-ages adventure set outside of Valiant’s standard superhero continuity – featuring covers by David Lafuente (Ultimate Spider-Man, New Mutants) and Dan Parent (Archie, Kevin Keller)!

But first: Don’t be late for the first day of school in VALIANT HIGH #1 (of 4)! On May 30th, enter a hilarious reimagining of Valiant’s award-winning superhero universe – one where the next world-ending cataclysm will have to wait until after prom night!

On May 30th, get your own spot in the freshman class that launched a thousand legends when all-star creators Daniel Kibblesmith and Derek Charm come crashing into comic shops on May 30th for VALIANT HIGH #1 (of 4) – featuring covers by David Lafuente (Ultimate Spider-Man, New Mutants) and Sina Grace (Iceman, Lil’ Depressed Boy)!