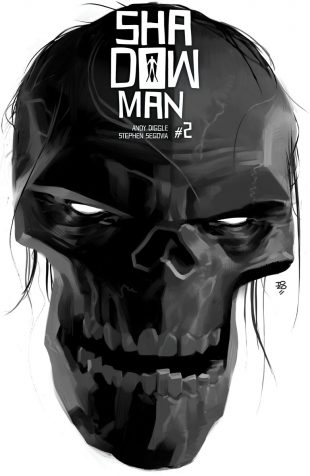 Valiant is proud to present your first look inside SHADOWMAN (2018) #2 – the second adrenaline-fueled installment of A POWERFUL NEW ONGOING SERIES from superstar writer Andy Diggle (Green Arrow: Year One, Daredevil) and high-octane artist Stephen Segovia (NINJAK, Action Comics)! A brand-new beginning for New Orleans’ supernatural icon continues here with the next awe-inducing, 30-page chapter of “FEAR OF THE DARK” – Diggle and Segovia’s introductory storyline – as Jack Boniface retakes his rightful place in the vanguard of Valiant’s most powerful heroes…even as an otherworldly force prepares to drag him to the damned darkness he thought he’d left behind…

In the tradition of X-O MANOWAR and BLOODSHOT REBORN, the must-read ongoing series of 2018 hits the rooftops running on April 25th as Andy Diggle and Stephen Segovia cry “FEAR OF THE DARK” in SHADOWMAN #2 – featuring covers by Tonci Zonjic (Who is Jake Ellis?), Renato Guedes (BLOODSHOT SALVATION), Juan José Ryp (BRITANNIA, NINJA-K), and Ben Templesmith (30 Days of Night)!

Then: Shadowman’s inaugural year will soon spiral into “DEAD AND GONE” – an epic exploration into the true power and impact of the Shadowman legacy across the ages, spanning SHADOWMAN #4-7 and featuring a rotating cast of all-star artists, including Shawn Martinbrough (Thief of Thieves, Black Panther), Doug Braithwaite (X-O MANOWAR, Journey into Mystery), and Renato Guedes (BLOODSHOT SALVATION), on each issue!

And finally: Just in time for Halloween, the battle for the legacy of Master Darque erupts into civil war for “RAG AND BONE,” an all-new jumping-on point encompassing SHADOWMAN #8-11 and featuring the return of high-octane artist Stephen Segovia!