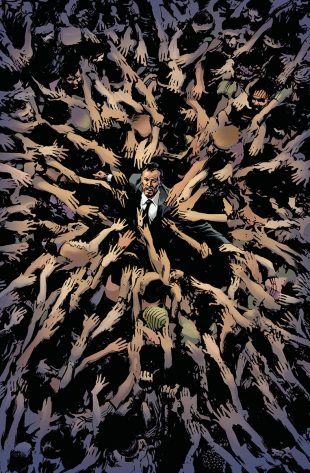 As revealed today at ComicsPRO 2018, Valiant is proud to announce THE LIFE AND DEATH OF TOYO HARADA #1 – the FIRST ISSUE of a SIX-PART, PRESTIGE SERIES from Eisner Award-winning writer Joshua Dysart (HARBINGER, HARBINGER WARS, Unknown Soldier) and spectacular rising star CAFU (RAPTURE)! Alongside each oversized issue’s main narrative – set in the present day and featuring stunningly detailed art by CAFU – each chapter of THE LIFE AND DEATH OF TOYO HARADA will also feature a striking episode from Harada’s past, illustrated by a rotating cast of staggering guest talents, including Mico Suayan (BLOODSHOT REBORN), Lewis LaRosa (BLOODSHOT SALVATION), Adam Pollina (X-Force), and more yet to be revealed when the series debuts in early 2019.

As detailed in depth at Vulture, THE LIFE AND DEATH OF TOYO HARADA #1 will see Dysart – one of the driving forces behind Valiant’s visionary HARBINGER saga – make his long-awaited return to the forefront of the Valiant Universe with a sweeping, continent-spanning chronicle of the man behind the rise and fall of the Harbinger Foundation…and, in the modern day, his last gambit to remake Earth in his own utopian image…or sacrifice everything in the process…

“THE LIFE AND DEATH OF TOYO HARADA is one of the most ambitious projects Valiant has ever attempted and quite unlike anything we’ve published to date. Joshua Dysart is a master of character, but out of all of his many contributions to Valiant, his depiction of Harada is the one that has perhaps resonated the most,” said Valiant Editor-in-Chief Warren Simons. “But this isn’t just a villain’s tale – Harada is among Valiant’s most powerful and complex characters, and at his core, he’s still a man. Now, Joshua is painting on a bigger, more expansive, more groundbreaking canvas than ever before to reveal the unseen corners of Harada’s life and the painful journey that shaped him from a child of war into the central force of the Valiant Universe. This is a story of war, of family, of politics, and of ultimate power – exactly the kind of story that we pride ourselves on telling at Valiant.”

In 2019, that day will finally come. With the existence of psiots revealed to the world and the Harbinger Foundation left in ruins, Harada has been run to ground and outed as the invisible hand behind the course of recent human history. With his resources dwindling and a death warrant on his head, the world’s most powerful man is about to become its most dangerous…

“[Harada] is interesting because of the conflict between his character and his intentions,” series writer Joshua Dysart told Vulture. “He’s been the villain of all my work at Valiant because he is profoundly undemocratic. He believes, unequivocally, that he is the only man capable of bringing about a globally equitable society. His lack of self-doubt makes him ruthless. He believes he is at the ‘center of God’s eye,’ so to speak. But he is a complicated villain because he very well may be absolutely right. It might take a Toyo Harada to save humanity.”

Genius. Refugee. Billionaire. Zealot. Terrorist. In 2019, the greatest untold story in the history of the Valiant Universe can finally be revealed as Joshua Dysart, CAFU, and an all-star assemblage of Valiant’s greatest talents come together to record THE LIFE AND DEATH OF TOYO HARADA #1 – featuring cover artwork by Eisner Award-nominated artist Butch Guice (Captain America: The Winter Soldier) and more yet to be revealed!