Reserve the Complete Epic and Unlock the Most Powerful Event in Valiant History with Never-Before-Seen Bonus Content, Extras, and More! 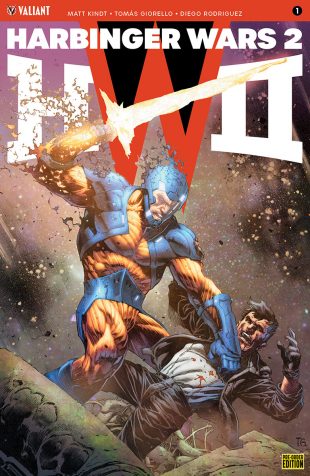 Valiant is proud to present THE COMPLETE HARBINGER WARS 2 PRE-ORDER EDITION BUNDLE – available only as a pre-order set to fans who reserve the summer’s SEISMIC, SIX-ISSUE EVENT with their local comic shop by the initial order date (IOD) of March 29th, 2018!

Released monthly from May 2018 through September 2018, each PRE-ORDER EDITION comes packed with trade paperback-style extras and bonus content, including creator commentary, behind-the-scenes looks at the creation of the comics, process character designs and artwork, and first looks at upcoming issues – plus exclusive covers by Valiant superstars Tomás Giorello (X-O MANOWAR) and Khari Evans (HARBINGER) that can’t be found anywhere else!

Fans and retailers, take note: The only way to obtain these exclusive items is to pre-order all six issues with your local comic shop by the initial order date of March 29th, 2018! No more copies will be made available beyond that date and subsequent issues will not be offered in later solicitations!

Available only as a pre-order set to fans who reserve all six issues from blockbuster creators Matt Kindt, Eric Heisserer, Tomás Giorello, Raúl Allén, and Patricia Martín, THE COMPLETE HARBINGER WARS 2 PRE-ORDER EDITION BUNDLE – including HARBINGER WARS 2: PRELUDE #1, HARBINGER WARS 2 #1-4, and HARBINGER WARS 2: AFTERMATH #1 – is the only way to get six massively expanded, 40-page editions encompassing the whole of Valiant’s cataclysmic summer event…so be sure to reserve yours with your local comic shop by the initial order date of March 29th, 2018!