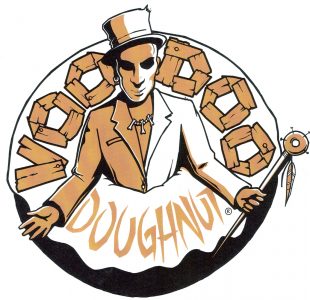 Valiant Entertainment is proud to announce a new collaboration with the world-famous Voodoo Doughnut in honor of Shadowman – Valiant’s voodoo-powered hero, returning to comic shops worldwide on March 28th in SHADOWMAN (2018) #1 – that will be made available exclusively to retailers attending the ComicsPRO 2018 Annual Membership Meeting in Portland, Oregon.

Custom designed by Voodoo’s renowned team of sugar-inspired artisans, attending retailers will have their choice of two exclusive Shadowman specialties, each adorned with a hand-piped rendition of the character’s iconic mask – chocolate on a vanilla frosted doughnut filled with chocolate Bavarian cream, or vanilla on a chocolate frosted doughnut filled with raspberry jelly – during Valiant’s annual ComicsPRO presentation on Friday, February 23rd.

The first-of-its-kind collaboration between Valiant and Voodoo Doughnut will debut just weeks before the release of SHADOWMAN (2018) #1 – the first issue of the powerful new ongoing series from superstar writer Andy Diggle (Green Arrow: Year One) and explosive artist Stephen Segovia (Action Comics). In the epic tradition of X-O MANOWAR and BLOODSHOT REBORN, a staggering new beginning for Valiant’s supernatural icon starts here on March 28th with PART ONE of “FEAR OF THE DARK” – a tense and gripping three-issue introduction pushing Jack Boniface to the farthest edge of fear itself…and into a startling, adrenaline-fueled fight for survival as Shadowman takes command of the birthright he was born to uphold!

From his first appearance in 1992 onward, Shadowman has stood at the forefront of Valiant’s shared superhero universe, with sales of more than 5.5 million in comics and graphic novels. Shadowman was also the basis of a blockbuster video game franchise from Acclaim Entertainment, and, in 2017, it was announced that Oscar nominee Reginald Hudlin (Marshall) would direct the upcoming Shadowman feature film from a script by screenwriters Adam Simon (Salem) and J. Michael Straczynski (Thor, World War Z).

The ComicsPRO Annual Membership Meeting brings together many segments of the comic book industry with the goal of working together to improve the sales and the profile of comic books. Many retailers, publishers, distributors and other vendors consider the ComicsPRO Annual Membership Meeting to be the most useful and productive retail-vendor interaction in the industry. ComicsPRO AMM attendees put an emphasis on professional and courteous discourse between every industry segment.

Voodoo Doughnut is the exciting brand branching out from Portland, Oregon. Creators of the Bacon Maple Bar, Portland Cream and Memphis Mafia, Voodoo has taken the world by storm. With their crazy concoctions, their kooky co-founders have taken the classic doughnut shop and taken it to a whole new level. Cat Daddy and Tres built their “little doughnut shop that could,” into a dynamic fun zone in front of and behind the counter, with locations in Oregon, Colorado, Texas, California and their latest pastry palace to open this spring on the Citywalk at Universal Studios, Orlando.