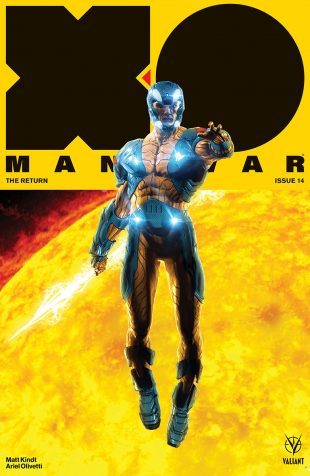 As revealed today at Multiversity Comics, Valiant is proud to present your first lettered look inside X-O MANOWAR (2017) #14 – A STAGGERING STANDALONE MILESTONE and ALL-NEW JUMPING-ON POINT from New York Times best-selling writer Matt Kindt (DIVINITY, Mind MGMT) and blockbuster artist Ariel Olivetti (The Incredible Hulk)! On April 25th, the soldier-turned-emperor at the heart of Valiant’s best-selling sci-fi juggernaut ends his galaxy-spanning crusade across the cosmos with a star-studded return to Earth…and sets the stage for the cataclysmic onset of HARBINGER WARS 2, the must-read comics event of 2018!

This spring, jump on board the superhero saga that has redefined the Valiant Universe’s number-one icon with a landmark moment for one of the most revered monthly series anywhere in comics today:

“Profound… X-O MANOWAR deserves to be recognized not only for its high quality, but its consistency.” – SyFy Wire

“Truly monumental…with every page being a visual knockout. Hail to the king, baby!” – Critical Hit

“✮✮✮✮½… An exciting ride through the depths of space, fast paced and written to intrigue… I’m already hooked!” – We Have a Hulk