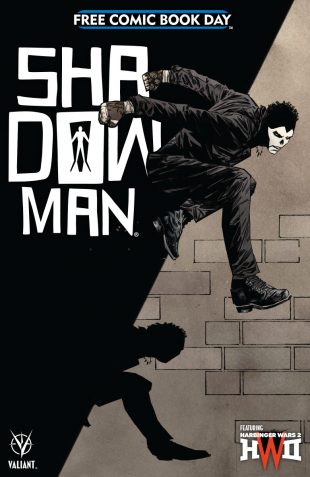 Valiant is proud to reveal your first look at the final cover art for the VALIANT FCBD 2018 SHADOWMAN SPECIAL – Valiant’s world-shaking, silver-level offering for Free Comic Book Day 2018! On May 5th, the most acclaimed publisher in comics today presents an advance look ahead at Valiant’s biggest year yet with SHADOWMAN, HARBINGER WARS 2, X-O MANOWAR and a raft of special surprises – including a never-before-seen cover by Harvey Award-nominated artist Roberto de la Torre (THE DEATH-DEFYING DR. MIRAGE, Ms. Marvel)!

First up: Superstar writer Andy Diggle (Green Arrow: Year One, Daredevil) and high-octane artist Stephen Segovia (NINJAK, Action Comics) present a must-read introduction to the world of Valiant’s POWERFUL NEW ONGOING SERIES as Jack Boniface reemerges from the Deadside to reclaim his birthright – and forge a new legend of magic, might, and malice – with an exclusive look ahead at Diggle’s two-year master plan for Valiant’s supernatural icon, beginning in SHADOWMAN (2018) #1!

In the East, one of the most powerful minds on Earth, Peter Stanchek, is leading his band of Renegades across the country, activating any potential psiots willing to join them, and building an insurrection force of ultra-powerful and unwieldy new powers that will soon bring war to Omen’s doorstep…and the unstoppable force known as X-O Manowar raging back to Earth…

In the West, Livewire – the telekinetic technopath with the ability to bend machines and computers to her will – will be forced to choose between her former allies… or her newfound team of Secret Weapons. As the situation escalates beyond human control, the United States will be plunged into darkness from coast to coast, launching Bloodshot and Ninjak into a dangerous mission to neutralize their one-time teammate – and setting the stage for the most shocking, most violent, and most consequential clash of powers ever witnessed in the history of the Valiant Universe!

And that’s just the beginning! Also inside the pages of the VALIANT FCBD 2018 SHADOWMAN SPECIAL, don’t miss X-O MANOWAR, BLOODSHOT SALVATION, NINJA-K, QUANTUM AND WOODY!, SECRET WEAPONS, and top-secret surprise appearances from across the Valiant Universe! Be here as Valiant begins its most explosive year yet with a non-stop barrage of stories, sneak peeks, teasers, and more, exclusively for Free Comic Book Day 2018 – now featuring a stunning new cover from renowned artist Roberto de la Torre!