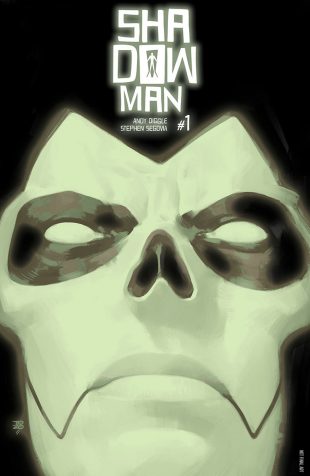 In advance of initial orders for SHADOWMAN #1 – the FIRST ISSUE of the POWERFUL NEW ONGOING SERIES by superstar writer Andy Diggle (Green Arrow: Year One, Daredevil) and high-octane artist Stephen Segovia (Action Comics) – Valiant is proud to announce that it will be combining the debut issue’s ultra-limited, glow-in-the-dark variant cover with the publisher’s highly sought-after metal printing process to produce a true first in the history of the Valiant Universe: the SHADOWMAN #1 Glow-in-the-Dark Brushed Metal Variant!

Due to popular fan and retailer demand, this strictly limited edition of Valiant’s most anticipated first issue comes printed via a special process on an actual brushed aluminum metal sheet…which will then recast the cover artwork of Eisner Award-nominated artist Tonci Zonjic (Who is Jake Ellis?) in hauntingly luminescent glow-in-the-dark ink!

Following in the footsteps of Valiant’s previous Brushed Metal Variants – including X-O MANOWAR (2017) #1, BLOODSHOT SALVATION #1, and NINJA-K #1 – this highly collectible rendition of Valiant’s biggest and most anticipated ongoing series debut of 2018 is only the fourth such cover ever produced and the first to utilize a secondary glow-in-the-dark enhancement.

A staggering new beginning for Valiant’s supernatural icon starts here on March 28th in SHADOWMAN (2018) #1 with PART ONE of “FEAR OF THE DARK” – a tense and gripping three-issue introduction pushing Jack Boniface to the farthest edge of fear itself…and into a startling, adrenaline-fueled fight for survival as Shadowman takes command of the birthright he was born to uphold!