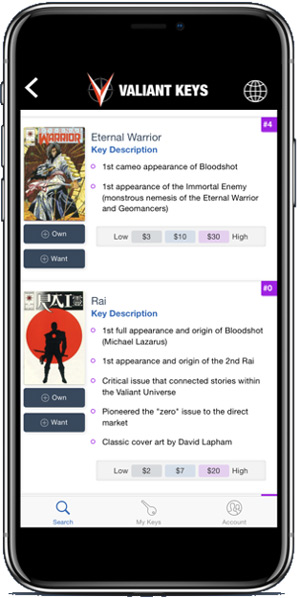 Valiant Entertainment is proud to announce that it has joined forces with Key Collector Comics – currently available for iOS and Android – for their first official publisher partnership! The free-to-download mobile app aims to make collecting the most seminal single issues from across the renowned publisher’s 25-year history easier than ever before with a complete list of Valiant’s biggest and most sought-after milestones!

The Key Collector Comics app is a concise and comprehensive resource that isolates issues of significance from the clutter of uneventful comics. It features information regarding over 7,000 key issue comic books, as well as a simplified price guide, robust search filters, and a cataloguing system to determine the value of your own collection.

To download the app for free today, find Key Collector Comics on the iOS App Store or Google Play, or visit keycollectorcomics.com.