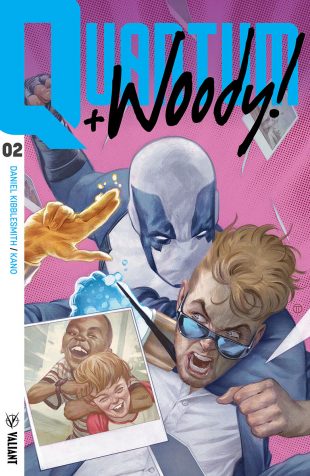 As first revealed at the A.V. Club, Valiant is proud to present your first look inside QUANTUM AND WOODY! (2017) #2 – the second sensational issue of the ALL-NEW and UNPREDICTABLE ONGOING SERIES by rising star Daniel Kibblesmith (The Late Show With Stephen Colbert) and eye-popping artist Kano (Daredevil)! On January 31st, the must-read superhero-action-family-drama-buddy-comedy throwdown of 2018 cries all the tears as it tells the saddest truth of all: Quantum and Woody are the world’s worst superhero team…no more!

But first: On December 20th, don’t miss out when QUANTUM AND WOODY! (2017) #1 comes careening into shops everywhere with a must-read first issue debut from red-hot writer Daniel Kibblesmith and dazzling artist extraordinaire Kano!