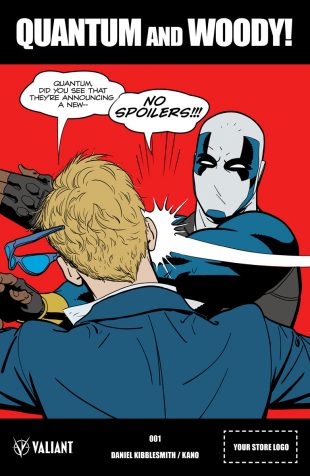 Valiant is proud to reveal a dangerously dazzling line-up of retailer-exclusive variant covers and promotional items coming soon to comic shops for QUANTUM AND WOODY (2017) #1 – the FIRST ISSUE of the ALL-NEW and UNTRUSTWORTHY ONGOING SERIES from rising star Daniel Kibblesmith (The Late Show with Stephen Colbert) and eye-popping artist Kano (Daredevil)!

FIRST: Hey you, internet dweller! Odds are you’ve probably seen quite a few memes in your time – now, get ready to spot them IRL with the advent of the QUANTUM AND WOODY! (2017) #1-4 Retailer Exclusive Meme Variants! For the first time anywhere, Valiant is offering qualifying retailers to get in on the dumbing down of America’s youth with piping hot homages to the internet’s most retweeted pieces of anonymous content – remade and reshaped in the vainglorious image of the world’s worst superhero team by artists Kano (Immortal Iron Fist), Mike Norton (Astro City), Tom Fowler (QUANTUM AND WOODY), and Jen Bartel (Jem & The Holograms)!

Attention retailers: For instructions on how to qualify for Valiant’s QUANTUM AND WOODY! (2017) Retailer Exclusive Meme Variants, please contact a member of the Valiant sales team at sales@valiantentertainment.com for minimums and details.

BUT THAT’S NOT ALL: As QUANTUM AND WOODY (2017) #1 prepares to barrel roll into comic shops everywhere on December 20th, so too is Valiant gearing up to splash your fans, readers, and weekly clientele with a stupendous selection of free promotional items, including: 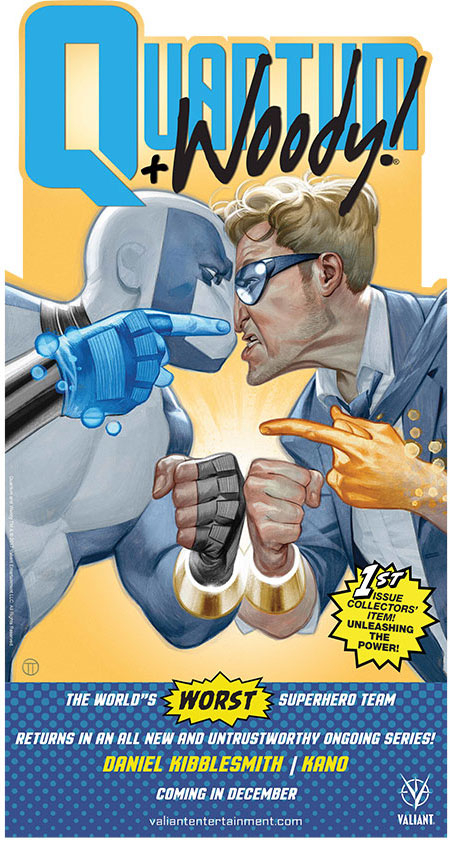 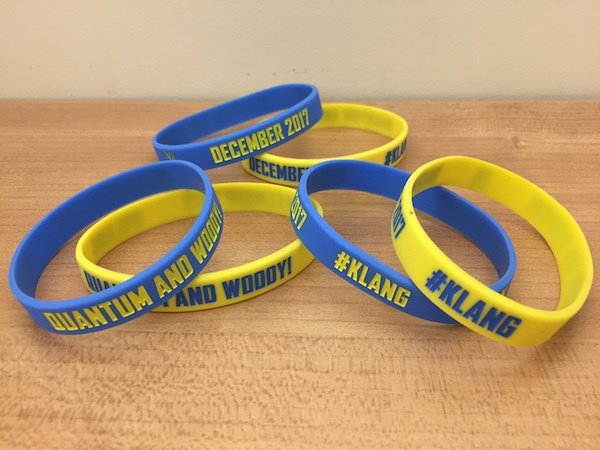 Earlier this month at New York Comic Con, Valiant distributed these distractingly stylish QUANTUM AND WOODY! PROMOTIONAL WRISTBANDS to attendees of the Diamond Retailer Breakfast. Now, Valiant is sharing the love with comic book stops across the country! Molded in bright blue and yellow silicone that represent Quantum and Woody’s dueling set of explosive powers, these wristbands are perfectly sized for KLANG-ing together – as soon as you find a buddy to wear the other one, of course! Shipping in bundles of 20 to participating retailers.

Make sure you and your store never miss an issue of this winter’s most anticipated new series with this custom-designed shelf-talker! Featuring the Diamond item codes for issues #1 through #3, as well as a quote highlighting QUANTUM AND WOODY! #1’s essential awesomeness!

Please contact sales@valiantentertainment.com for more information about each of these exclusive promotional items.

On the heels of X-O MANOWAR (2017) #1, SECRET WEAPONS #1, BLOODSHOT SALVATION #1,and NINJA-K #1, Valiant’s “ICONS” initiative is ready to send the comic book industry’s sense of propriety straight into the wood chipper with this new jumping-on point for two of Valiant’s biggest, baddest personalities! On December 20th, get ready for the most heartfelt, most eye-popping, and most punching-est superhero-action-family-drama-buddy-comedy throwdown of the year with QUANTUM AND WOODY (2017) #1!