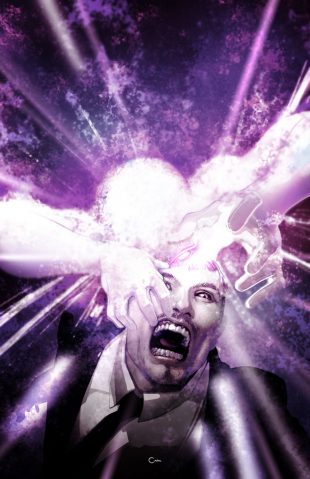 As first revealed at Newsarama, Valiant is proud to debut your first look inside HARBINGER WARS 2 #0 – an exclusive, limited-edition prelude to the publisher’s powerful 2018 crossover event that will only be made available EXCLUSIVELY to fans that redeemed mail-away coupons in HARBINGER RENEGADE #1-4! This December, the march toward the biggest and most ambitious Valiant event ever attempted starts right here with a standalone introduction from New York Times best-selling writer Matt Kindt (X-O MANOWAR, DIVINITY) and explosive artist Doug Braithwaite (X-O MANOWAR, ARMOR HUNTERS) that will set the stakes for next summer’s seismic comics conflict!

Available only to fans that have redeemed four mail-away coupons included in HARBINGER RENEGADE #1-4, HARBINGER WARS 2 #0 will lay the foundation for the bloodied future that has been foreseen by the world’s most high-powered threat: Alexander Solomon, Toyo Harada’s former protege and the Renegade’s newest adversary! But there are those that even Solomon fears… And, as the march toward HARBINGER WARS 2 builds over the coming year, a new and terrible force is about to reveal itself to the heroes of the Valiant Universe!

Featuring the Harbinger Renegades, H.A.R.D. Corps, and surprise guests assembled from throughout the Valiant Universe, HARBINGER WARS 2 #0 has been produced as a reward for Valiant’s most ardent longtime fans and the events of the issue will be entirely self-contained. As such, HARBINGER WARS 2 #0 will enhance, but not directly impact comprehension of, the primary HARBINGER WARS 2 comics event coming soon to comic shops everywhere.

Utilizing an expansive, new and never-before-attempted comics format, each issue of the HARBINGER WARS 2 event will come fully loaded with 48 pages of content and two complete, full-length 22-page stories chronicling dueling fronts in the nationwide battle that will soon consume the Valiant Universe’s most powerful forces. The first, by writer Matt Kindt and artist Tomás Giorello – the blockbuster creative team that launched X-O MANOWAR, the most successful independent series of 2017 – will feature the head-on collision of the Harbinger Renegades and the newly returned X-O Manowar. The second, by writer Eric Heisserer and artist Raúl Allen with Patricia Martín – reuniting the all-star creators behind SECRET WEAPONS, 2017’s most successful independent limited series – will thrust Livewire and her new team of recruits into the center of a power struggle with the potential to tear America apart…

Next summer, the cataclysmic comics event of the New Year erupts in full force as X-O Manowar, Livewire, the Harbinger Renegades, Bloodshot, the Secret Weapons, Ninjak, and a cast of thousands draw their battle lines in HARBINGER WAR 2 #1 (of 4) –  featuring covers by superstar artist J.G. Jones (Final Crisis) and more top talents soon to be revealed!