Valiant is proud to reveal the fully animated video trailer for the publisher’s “ICONS” initiative – an all-new wave of ongoing series, prestige format projects and standalone events featuring the Valiant Universe’s biggest and most demanded heroes! Out of the record-setting success of X-O MANOWAR (2017) #1 – the year’s best-selling ongoing series from any independent publisher – “ICONS” is preparing to go further than ever before with three all-new, must-read monthly series colliding the publisher’s hardest-hitting and most iconic characters with an A-level roster of creative talents that will push Valiant to its furthest heights yet…

Today, Ray Garrison and his true love, Magic, thought they had left their days of tumult and violence behind them as they raise their newborn daughter, Jessie, in the quiet isolation of the countryside… Until Magic’s father – the depraved cultist simply named “Daddy” – seeks to bring his wayward progeny back into his flock by any means necessary. Now, torn between the family that loves him and the rage within, the walking weapon of war once called Bloodshot is about to give in to revenge…

Meanwhile, in the near future, can Magic and the now-adolescent Jessie outmaneuver the killer called Rampage long enough to answer the question that has haunted them for years… Whatever happened to the man they both loved? What has become of Bloodshot? This fall, the answers in await in BLOODSHOT SALVATION #2 – featuring covers by Kenneth Rocafort (The Ultimates), Monika Palosz (X-O MANOWAR), Philip Tan (Suicide Squad), Greg Smallwood (Moon Knight), and Glenn Fabry (Preacher)!

THEN: On November 15th, Valiant “ICONS” unleashes a new assignment for Colin King, the latest in a long line of international operatives assigned to defend queen and country on behalf of Britain’s black-budget secret service, in NINJA-K #1 – the 40-PAGE FIRST ISSUE of the ALL-NEW, EXPLOSIVE ONGOING SERIES from renowned writer Christos Gage (Netflix’s Daredevil) and superstar artistTomás Giorello (X-O MANOWAR)!

On November 15th, join all-star creators Christos Gage and Tomás Giorello as they lead Ninjak on a manhunt through a cold, calculating world of espionage and international intrigue, only in NINJA-K #1 – featuring covers by Trevor Hairsine (DIVINITY), rising star Lucas Troya, Tonci Zonjic (Who is Jake Ellis?), Kenneth Rocafort (The Ultimates), and David Mack (Fight Club 2)!

FINALLY: On December 20th, you’ll believe two men and one goat can split a one-bedroom apartment and still be a credible threat to evil and injustice everywhere when QUANTUM AND WOODY! #1 (2017) – the FIRST ISSUE of the ALL-NEW and UNTRUSTWORTHY ONGOING SERIES from rising star Daniel Kibblesmith (The Late Show with Stephen Colbert) and explosive artist Kano (Daredevil) – makes headlines and take names!

Sometimes… you embrace your destiny. And sometimes… you and your trouble-making adopted brother find yourselves trapped in a scientific lab explosion that grants you $@&%ing awesome super-powers. As a result of their accident, Eric and Woody Henderson – aka Quantum and Woody – must “klang” their wristbands together every 24 hours or both dissipate into nothingness. Which makes superhero-ing pretty awkward when you’re not on speaking terms at the moment. See, Eric has been keeping a pretty big secret: He knows who Woody’s birth father really is… and where he’s been hiding all these years.

Consider yourself warned… This winter, the world’s worst superhero team is careening back into action as Valiant’s “ICONS” initiative throws the comic book industry’s sense of propriety straight into the wood chipper for the most heartfelt, most eye-popping, and most punching-est superhero-action-family-drama-buddy-comedy throwdown of the year, only in QUANTUM AND WOODY! (2017) #1 – featuring covers by Julian Totino Tedesco (Hawkeye), Geoff Shaw (God Country), Nick Pitarra (The Manhattan Projects), comics legend Neal Adams (Green Lantern/Green Arrow), and Clayton Henry (ARCHER & ARMSTRONG)… and every gimmick known to man! 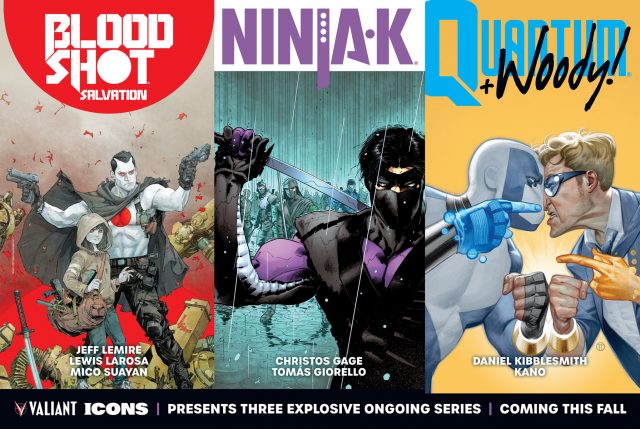