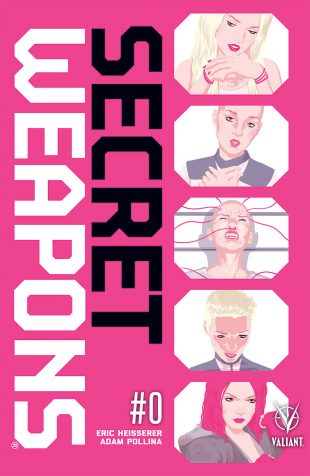 As first revealed at the Hollywood Reporter, Valiant is proud to announce SECRET WEAPONS #0 – an all-new, standalone prelude to the year’s best-selling independent limited series from Academy Award-nominated writer Eric Heisserer (Arrival) and legendary artist Adam Pollina (X-Force)! Before the fall of the Harbinger Foundation… Before the opening pages of SECRET WEAPONS #1…  An essential new chapter in the Harbinger mythos will soon be revealed as Nikki Finch – a future founding member of Livewire’s squadron of misfit telekinetics – relives the never-before-told saga of her recruitment and activation at the hands of Toyo Harada’s Harbinger Foundation in a must-read standalone special from two of Valiant’s most accomplished storytellers!

Told in an poetic storytelling style chronicling the most formative year of Nikki’s life one week – and one panel – at a time, the New Year’s most surprising and poignant superhero origin starts here on January 3rd with an all-new introduction to the world of SECRET WEAPONS, the breakout series that has earned acclaim and accolades from all corners of the globe:

“✮✮✮✮✮… Downright genius at times… This is high-quality comics, with art and story coming together beautifully.” – AiPT!

PLUS: In advance of HARBINGER WARS 2 – the seismic crossover event of 2018 – discover​​ Livewire and her new trainees’ epic impact on the landscape of Valiant Universe with the SECRET WEAPONS TPB collection, in stores December 13th! Collecting all four issues of the sold-out series from all-star creators Eric Heisserer (Arrival) and Raul Allen (WRATH OF THE ETERNAL WARRIOR), one of 2017’s most pivotal and widely acclaimed debuts returns in an intro-priced, $9.99 trade paperback that is the ultimate introduction to the Valiant Universe’s newest band of heroes! A young girl who can talk to birds… A boy who can make inanimate objects gently glow… To others, these are expensive disappointments. But, to Livewire, they are secret weapons…in need of a leader. Now, as a mechanized killer called Rex-O seeks to draw them out, Livewire and her new team of cadets will be forced to put their powers into action…in ways they never could have imagined…