As first revealed at Comic Book Resources, Valiant sure seems proud of itself to announce THE MOST VARIANT COVER OF ALL TIME! – an unholy and experimental combination of comic book history’s most noted, notorious, and obnoxious cover gimmicks – chromium, lenticular, embossing, die-cutting, iridescent ink, and more – onto one highly limited, meticulously crafted edition of December’s QUANTUM AND WOODY! (2017) #1! In honor of the FIRST ISSUE of the ALL-NEW and UNTRUSTWORTHY ONGOING SERIES from rising star Daniel Kibblesmith (The Late Show with Stephen Colbert) and explosive artist Kano (Daredevil), Valiant is COMBINING AT LEAST EIGHT OF THE MOST POPULAR* COVER ENHANCEMENTS EVER PRODUCED ONTO ONE COVER to create a singular piece de resistance that will forever enshrine the world’s worst superhero team in the record books for now and all time! 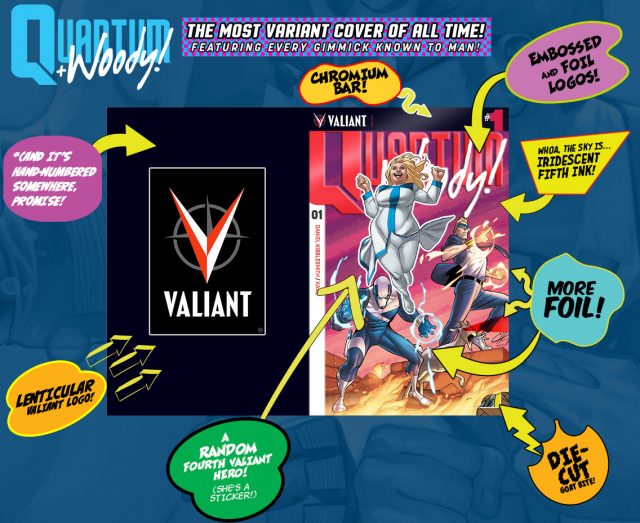 You wanted the best, you got the best (we could do)! In wake of X-O MANOWAR (2017) #1, SECRET WEAPONS #1, BLOODSHOT SALVATION #1, and NINJA-K #1, Valiant’s “ICONS” initiative – a new wave of must-read monthly series, prestige-format projects, and standalone events for the publisher’s biggest and most demanded heroes – is taking things way too far with the return of the world’s worst superhero team! That’s right – on December 20th, the Valiant Universe is about to get the adjective-worthy superheroes it deserves: QUANTUM AND WOODY!

PLUS: In honor of Quantum and Woody’s upcoming overthrow of comic shops everywhere, each of the new series’ first 12 issues will also feature EXTREME ULTRA-FOIL VARIANTS — a dynamic, new(ish) cover treatment featuring artwork by superstar artist Geoff Shaw (God Country) EMBOSSED and ENHANCED with AUTHENTIC COMICS FOIL FROM THE ‘90s!

*Except glow in the dark. We tried, though.