From New York Times best-selling writer Jeff Lemire (BLOODSHOT REBORN, Moon Knight) and extraordinary artists Lewis LaRosa (BLOODSHOT REBORN) & Mico Suayan (BLOODSHOT REBORN), a bloody and vengeful new era for Bloodshot begins this September as Ray Garrison escapes his violent past to build the one thing he never thought he’d earn: a family. But when a hateful secret from his true love’s past threatens their fragile peace, Bloodshot will be forced to run headlong into a barrage of blood, bullets, and broken bones for a revenge-fueled assault that will have crushing consequences for those he holds most dear…

Soon: Eight years from today, Bloodshot’s daughter has inherited her father’s incredible abilities. Hunted by a high-tech kill squad called Omen, Jessie must hone her powers…and learn how to survive before the world is swallowed whole by the darkness that now pervades
America… 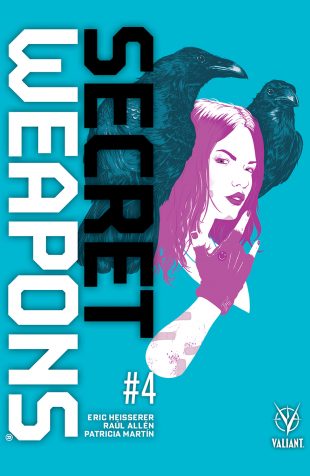 After weeks of training and preparation, the time has come for Livewire and her specially gifted recruits to lure the robotic killer called Rex-O out of hiding! But will this extraordinary new team of heroes rise to the occasion and unlock the power they’ve always harbored inside…or will they find out that they deserved to be left behind? Their lives have led to this moment…and before the battle ends, Livewire and her team’s place in THE ROAD TO HARBINGER WARS 2 will be made clear!