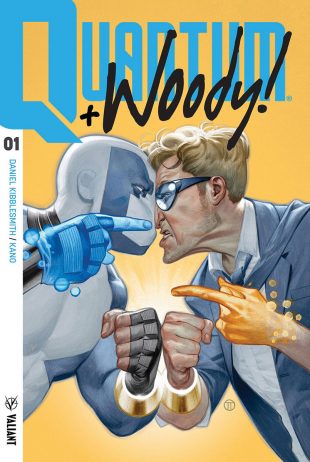 As first revealed at Entertainment Weekly, Valiant is proud to present your first look inside QUANTUM AND WOODY! (2017) #1 – the FIRST ISSUE of the ALL-NEW and UNTRUSTWORTHY ONGOING SERIES from rising star Daniel Kibblesmith (The Late Show with Stephen Colbert) and explosive artist Kano (Daredevil) with covers by astonishing artist Julian Totino Tedesco (Hawkeye)!

In wake of X-O MANOWAR (2017) #1, SECRET WEAPONS #1, BLOODSHOT SALVATION #1, and NINJA-K #1, Valiant’s ICONS initiative – a new wave of must-read monthly series, prestige-format projects, and standalone events for the publisher’s biggest and most demanded heroes – is taking things way too far with the return of the world’s worst superhero team! That’s right – on December 20th,the Valiant Universe is about to get the adjective-worthy superheroes it deserves up in its business: QUANTUM AND WOODY!

“Quantum and Woody has always been a buddy-comedy at it’s heart, and my favorite part of writing them so far is the bantering (or bickering) because the characters carry you away so naturally, it’s easy to get carried away in their back and forth,” Daniel Kibblesmith told EW. “It’s sort of the background noise of their heroism – you don’t imagine Batman talking much when he’s driving to the scene of the crime, but Quantum and Woody are bickering the entire time.”

PLUS: In honor of Quantum and Woody’s upcoming overthrow of comic shops everywhere, Valiant can now “proudly” reveal that each of the new series’ first 12 issues will also feature “EXTREME” ULTRA-FOIL VARIANTS — a dynamic, new(ish) cover treatment featuring artwork by superstar artist Geoff Shaw (God Country) EMBOSSED and ENHANCED with AUTHENTIC COMICS FOIL FROM THE ‘90s!

Available at the standard cover price with no minimum order qualifications for retailers, relive the face-melting radditude of the era that gloriously birthed Beavis and Butthead Ren and Stimpy Quantum and Woody into comics history with the best foil covers ever produced by a major comics publisher* as Valiant’s “EXTREME” ULTRA-FOIL VARIANTS kick nostalgia in the nards!

“When we say that we’re utilizing actual comics foil from the 1990s, we mean actual comics foil from the 1990s,” said Valiant CEO & Chief Creative Officer Dinesh Shamdasani. “In anticipation of Quantum and Woody’s return, we scoured the earth in the search of the rarest, most obscure, most arcane comics printing practices ever produced – only to find a true ‘holy grail of holofoil’ in the wilds of Canada that had gone virtually untouched for the better part of two decades. Over the next year, we’re going to be digging deep into those lost archives and combining numerous elements – some new, some old, some reclaimed from the some of the most prominent covers of the 90s – to create what we think are some of the most dynamic, eye-catching, and artistic uses of cover enhancements in the modern era.

“This line is partially a tribute, partially an art project, and partially an excuse to outdo the competition with what we believe will be some of the most coveted and sought-after covers of the year – all in celebration of the energizing, heartwarming, and hilarious story being crafted by Daniel Kibblesmith and Kano.”

THEN: Don’t relax, we’re not through here yet… Fans and collectors can get their chase on with Valiant’s “EXTREME” ULTRA-FOIL CHASE VARIANT subset! Each month, in the tradition of comics’ most highly sought-after oddities and error editions, Valiant will produce a single, STRICTLY LIMITED-RUN VARIANT of Geoff Shaw’s “EXTREME” ULTRA-FOIL artwork with A RARE, SPECIALIZED and SUPREMELY WACKY ‘90s FOIL!

BUT WAIT, THERE’S MORE: Stay tuned for the yet-to-be-revealed QUANTUM AND WOODY! (2017) #1 MOST VARIANT COVER OF ALL TIME! – a super-chase incentive specially designed to break variants once and for all time!