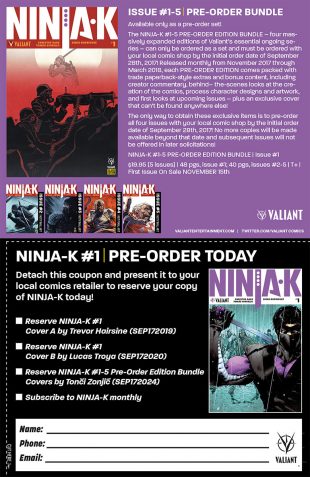 Valiant is proud to announce that the publisher’s next essential pre-order bundle is getting even bigger!

At the height of 1970s Britain, MI-6’s covert Ninja Programme has just activated its first female agent: NINJA-G! As a financial crisis grips the nation and anarchy brews in the streets, can MI-6’s newest ninja recruit counter a steady tide of the double agents, double crosses, and dueling nation states that will take her from the leather-padded corridors of London to the most severe corners of the Soviet Bloc? The life expectancy of a ninja agent is never long…but just how and why are NINJA-G’s missions still impacting Ninjak’s deadly manhunt in the modern day? And could her legacy hold the secret to decoding the murders of the Ninja Programme’s last surviving members – before Colin King is scratched off the list once and for all?

Available only as a pre-order set to fans who reserve the first five issues of the EXPLOSIVE NEW ONGOING SERIES from acclaimed writer Christos Gage (Netflix’s Daredevil) and Valiant superstar Tomas Giorello (X-O MANOWAR), the NINJA-K #1-5 PRE-ORDER EDITION BUNDLE kicks off with a jam-packed 48-page debut and exclusive covers by Eisner Award-nominated artist Tonci Zonjic (Who is Jake Ellis?, Immortal Iron Fist) on each issue – all specifically reserved for fans who pre-order with their local comic shop by the initial order date (IOD) of September 28th, 2017!

Packed with the same trade paperback-style extras and bonus content – including creator commentary, behind– the-scenes looks at the creation of the comics, process character designs and artwork, and first looks at upcoming issues – this pre-order edition will not be offered past the initial order date of September 28th, 2017!

Released monthly from November 2017 through March 2018, each PRE-ORDER EDITION comes packed with trade paperback-style extras and bonus content, including creator commentary, behind–the-scenes looks at the creation of the comics, process character designs and artwork, and first looks at upcoming issues – plus an exclusive cover by renowned artist Tonci Zonjic that can’t be found anywhere else!

It all starts here on November 15th as renowned writer Christos Gage (Netflix’s Daredevil) and Valiant’s latest superstar artist, Tomas Giorello (X-O MANOWAR), present a stunningly precise jumping-on point leading Ninjak on a manhunt through a cold, calculating world of espionage and international intrigue in search of a killer targeting all “ninja” agents – past and present!

Then: This February, red-hot writer Christos Gage (Avengers: The Initiative) and blockbuster artist Juan Jose Ryp (HARBINGER RENEGADE) present a standalone interlude with seismic ramifications for the Ninja Programme’s past and future as NINJA-G steps to the fore for a martial arts melee in the heart of 1970s London, only in NINJA-K #4 – now an essential addition to the NINJA-K #1-5 PRE-ORDER EDITION BUNDLE!