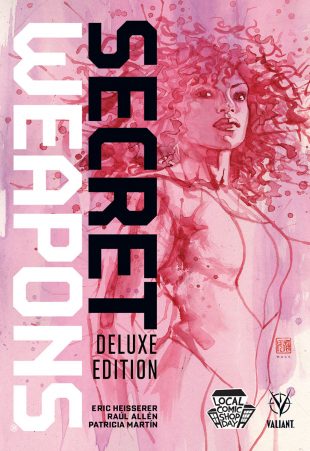 Collecting SECRET WEAPONS #1-4 with a cover by multiple Eisner Award nominee David Mack (Fight Club 2) and exclusive to Local Comic Shop Day 2017, this oversized hardcover collection of Valiant’s sold-out, critically acclaimed series will not be available for sale anywhere else, and arrives weeks before the SECRET WEAPONS TPB arrives in stores on December 13th.

Find out why Valiant has become the most critically acclaimed publisher in comics today with this can’t-miss presentation of the year’s most celebrated new series:

“✮✮✮✮✮… Downright genius at times… This is high-quality comics, with art and story coming together beautifully.” –AiPT!

The SECRET WEAPONS DELUXE OVERSIZED HC will feature a beautifully presented, deluxe repackaging of the critically lauded series, and feature more than 20 pages of bonus material including character designs, process art, and more that won’t be found anywhere else! Eric Heisserer – the Academy Award-nominated screenwriter of ARRIVAL and Valiant’s upcoming BLOODSHOT and HARBINGER feature films – joins forces with Harvey Award-nominated visionary Raúl Allén (WRATH OF THE ETERNAL WARRIOR) here for an all-new Valiant adventure… launching Livewire and an extraordinary new team of heroes into the fight of their lives!

“Comic shops are the heart and soul of the comics industry and play a very crucial role to its continued growth. That’s why we’re proud to continue supporting Local Comic Shop Day’s mission of supporting the brick and mortar storefronts that bring comics to fans nationwide,” said Valiant’s Director of Sales, Atom! Freeman. “Our offering for Local Comic Shop Day 2017 might also be our most ambitious yet with the SECRET WEAPONS DELUXE OVERSIZED HC – a shelf-worthy collection to one of our most successful series to date and one that won’t be available anywhere else. In making this highly collectible item exclusive only to Local Comic Shop Day, it’s our way of saying ‘thank you’ to the hundreds of retailers who continue to support this industry week after week, Wednesday after Wednesday.”

On Local Comic Shop Day®, participating retailers will have exclusive, and in some cases, limited items debuting from supporting publishers. The goal of Local Comic Shop Day® is to jump start the holiday buying season for storefront comics specialty retailers by giving comics fans more of what they most desire.

About Valiant Entertainment:Valiant Entertainment is a leading character-based entertainment company that owns the largest independent superhero universe in comics. With more than 80 million issues sold and a library of over 2,000 characters, including X-O Manowar, Bloodshot, Harbinger, Shadowman, Archer & Armstrong, and many more, Valiant is one of the most successful publishers in the history of the comic book medium. Today, the company’s characters continue to be forged in publishing, licensing, film, video games, and beyond. Valiant consistently produces some of the most critically acclaimed comics in the industry and has received numerous industry awards and accolades, including a Diamond Gem Award for Comic Book Publisher of the Year. In 2015, Valiant announced a multi-picture deal to bring Bloodshot and Harbinger to the big screen as feature films. Visit them online at ValiantEntertainment.com.
Archives >