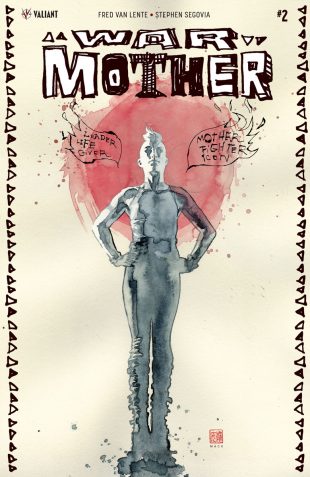 As revealed at Comic Book Resources, Valiant is proud to present your first look inside WAR MOTHER #2 – the second armor-piercing issue of THE RIVETING NEW SERIES from New York Times best-selling writer Fred Van Lente (ARCHER & ARMSTRONG, Amazing Spider-Man) and explosive artist Stephen Segovia (NINJAK, Action Comics)! On September 27th, out of the pages of the acclaimed BOOK OF DEATH and 4001 A.D. events, War Mother’s first full-length firefight in the Valiant Universe rages onward as she sets out to find a new haven for humanity in a world reclaimed by nature…and entirely without mercy…

Jump on board Valiant’s latest whirlwind jaunt into the 41st century here to find out why WAR MOTHERis a fast-paced, sci-fi joyride that has left fans and critics breathless:

“✮✮✮✮✮… A seductively fun opening issue with thrills and chills and action… Brilliant.” – The Broken Infinite

“✮✮✮✮½… The creative team behind WAR MOTHER does its characters proud and creates a strong, feral and complex world…” – Graphic Policy

“✮✮✮✮½… A lush world full of beauty and the grotesque… WAR MOTHER #1 is a strong book with a compelling lead character and beautiful depictions. Pick this gem up…” – All-Comic

“✮✮✮✮½…This book is perfect…WAR MOTHER is a complete and utter success.” – The Brazen Bull

“✮✮✮✮… So much detail and visceral action… WAR MOTHER is a franchise in the making.” – Spartantown

But first: Valiant’s next powerhouse hero charges from the pages of her sold-out appearances in BOOK OF DEATH and 4001 A.D. in WAR MOTHER #1 (of 4) – the FIRST ISSUE launching the 41st century’s unstoppable soldier into her landmark full-length debut! In comic shops everywhere now, Fred Van Lente and Stephen Segovia forge a new legend of the Valiant Universe as Ana – the designated War Mother of 4001 A.D. – undertakes a mission to rescue her people from extinction on a planet that has moved beyond mankind!