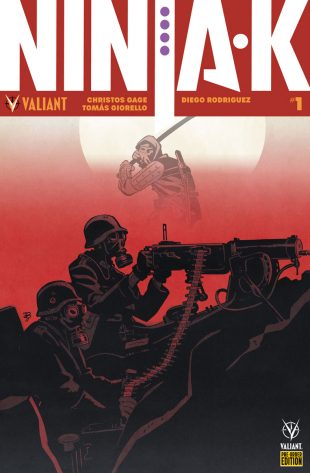 This November, Valiant is rewarding fans who pre-order the most fast-paced new series of the fall with specially expanded, limited editions of NINJA-K’s adrenaline-fueled first arc!

Valiant is proud to announce the NINJA-K #1-4 PRE-ORDER EDITION BUNDLE – available only as a pre-order set to fans who reserve the first four issues of the next EXPLOSIVE ONGOING SERIES in the Valiant “ICONS” line-up! From acclaimed writer Christos Gage (Netflix’s Daredevil) and Valiant superstar Tomas Giorello (X-O MANOWAR), the NINJA-K #1-4 PRE-ORDER EDITION BUNDLE kicks off with a jam-packed 48-page debut and exclusive covers by Eisner Award-nominated artist Tonci Zonjic (Who is Jake Ellis?, Immortal Iron Fist) on each issue – all specifically reserved for fans who pre-order with their local comic shop by the initial order date (IOD) of September 28th, 2017!

Released monthly from November 2017 through February 2018, each PRE-ORDER EDITION comes packed with trade paperback-style extras and bonus content, including creator commentary, behind–the-scenes looks at the creation of the comics, process character designs and artwork, and first looks at upcoming issues – plus an exclusive cover by renowned artist Tonci Zonjic that can’t be found anywhere else!

Fans and retailers, take note: The only way to obtain the NINJA-K #1-4 PRE-ORDER EDITION BUNDLE is to reserve this limited item with your local comic shop by the initial order date (IOD) of September 28th, 2017! No more copies will be made available beyond that date and subsequent issues will not be offered in later solicitations!

Jump on board here as England’s master intelligence operative accepts a daring new mission! Head to your local comic shop today to reserve the NINJA-K #1-4 PRE-ORDER EDITION BUNDLE and NEVER MISS AN ISSUE of Valiant’s must-read super-spy thriller, only in the NINJA-K #1-4 PRE-ORDER EDITION BUNDLE – available only to fans who pre-order by September 28th, 2017!