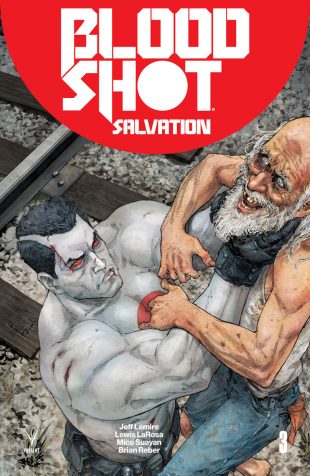 Valiant is proud to present your first look inside BLOODSHOT SALVATION #3 – the next punishing chapter of the BLOCKBUSTER ONGOING SERIES from New York Times best-selling writer Jeff Lemire (THE VALIANT, Black Hammer) and extraordinary artists Lewis LaRosa (BLOODSHOT REBORN) and Mico Suayan (BLOODSHOT REBORN)! On November 15th, Ray Garrison – the machine-enhanced weapon of war codenamed Bloodshot – takes the next step down a bloodied road of violence, villains, and vengeance as he confronts a deranged criminal separatist with a dark connection to his new family’s tragic past…

Soon: Years from today – in a world gone wrong where Bloodshot long ago went M.I.A. – can Magic and Jessie navigate the agents of Omen that now pursue them across the heartland? And just when their darkest hour arrives, a familiar face is about to appear with a helping hand…and a message from beyond the grave!

But first: A new beginning for Jeff Lemire’s Eisner Award-nominated Bloodshot saga begins on September 20th in BLOODSHOT SALVATION #1! Ray Garrison has escaped his violent past to build the one thing he never thought he’d earn: a family. But when a hateful secret from his true love’s past threatens their fragile peace, Bloodshot will be forced to run headlong into a barrage of blood, bullets, and broken bones for a revenge-fueled assault that will have crushing consequences for those he holds most dear…

Then: Bloodshot’s most brutal mission yet charges forward in BLOODSHOT SALVATION #2! On October 25th, Jeff Lemire, Lewis LaRosa and Mico Suayan wrench Ray Garrison back into the destructive ways he left behind for a soul-shattering mission to save his wife and daughter from a gallery of terrifying new threats… His next target? The technologically augmented powerhouse named Rampage!