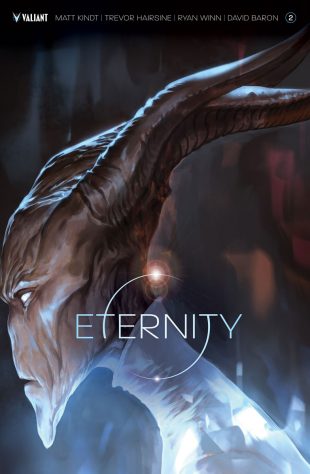 Beyond the Bounds of the Valiant Universe…A New Pantheon of Gods and Heroes Awaits!

As revealed at Graphic Policy, Valiant is proud to present your first look inside ETERNITY #2 – the second stunning chapter of A VISIONARY NEW SERIES introducing an infinite cosmos of new worlds, new beings, and new myths beyond the bounds of the Valiant Universe! On November 29th, join New York Times best-selling writer Matt Kindt (DIVINITY, Mindt MGMT) and blockbuster artist Trevor Hairsine (X-Men: Deadly Genesis) for a mind-bending journey to the source of Divinity’s god-like power…and unlock the secrets of the unreal plane called Eternity!

“It’s been fun to throw [Divinity] into a universe – the “Unknown” that gave him his powers – and populate it with a world full of like-powered characters,” writer Matt Kindt told Paste. “He’s not going to be in control anymore. If you’re imagining that this might lead to some kind of insane cosmic fist-fight through dimensions and realities and possibilities, you would be right!”