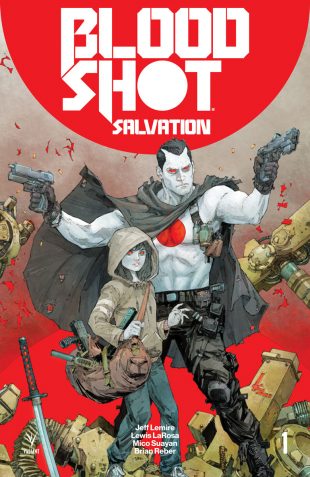 Plus: Get Your First Look Inside October’s BLOODSHOT SALVATION #2 by Lemire, LaRosa & Suayan!

As the highly anticipated BLOODSHOT SALVATION #1 prepares for a revenge-fueled mission of violence, villains, and vengeance on September 20th, Valiant is proud to reveal that one of the fall’s most anticipated new series debuts will now ship in the acclaimed “VALIANT PREMIUM” format – the same form of deluxe packaging introduced earlier this year with the launch of the all-new X-O MANOWAR #1!

Beginning with the release of BLOODSHOT SALVATION #1 on September 20th – the FIRST ISSUE of the BLOCKBUSTER ONGOING SERIES from New York Times best-selling writer Jeff Lemire (BLOODSHOT REBORN, Black Hammer) and a star-studded cast of explosive artists spanning the first year, including Lewis LaRosa (BLOODSHOT REBORN, SAVAGE), Mico Suayan (BLOODSHOT REBORN), Renato Guedes (DIVINITY #0, Wolverine), and Doug Braithwaite (X-O MANOWAR, BOOK OF DEATH) – fans and readers everywhere can now look forward to the “VALIANT PREMIUM” format appearing on each issue of BLOODSHOT SALVATION in 2017 and beyond. From the Deadside to the year 4001 A.D., Bloodshot is about to begin a bloodstained odyssey through the darkest corners of the Valiant Universe…

Features for BLOODSHOT SALVATION #1, the next series to showcase the “VALIANT PREMIUM” format, will include:

“The events of BLOODSHOT SALVATION will be of utmost importance to one of Valiant’s most central and beloved characters,” said Valiant CEO & Chief Creative Officer Dinesh Shamdasani. “From THE VALIANT onward, Jeff Lemire has overseen some of the most pivotal and transformative changes to Bloodshot in the character’s 25 years of history. Now, he’s going to be taking Bloodshot to deeper – and bloodier – depths than ever before. Fans and readers, take note: The ‘VALIANT PREMIUM’ format is a statement of quality, but it’s also much more. Just like with X-O MANOWAR, this is a way for us to signify a major series to watch in the Valiant publishing line. And make no mistake – BLOODSHOT SALVATION is going to be a seminal event for Bloodshot and the Valiant Universe on every level.”

On September 20th, Bloodshot barrels back to the battlefield for his most heart-wrenching mission yet! Jeff Lemire, Lewis LaRosa, and Mico Suayan begin one of the most soul-shattering tales of the year as the Valiant Universe’s unstoppable man of action prepares for his greatest sacrifice in BLOODSHOT SALVATION #1 – featuring covers by Kenneth Rocafort (The Ultimates), Monika Palosz (DIVINITY III: STALINVERSE), Tomas Giorello (X-O MANOWAR), Ryan Bodenheim (The Dying & The Dead), Greg Smallwood (Moon Knight), and Dave Johnson (100 Bullets)!

PLUS: On October 25th, the most unrelenting series of the fall reloads with BLOODSHOT SALVATION #2! The technologically augmented powerhouse known as Rampage takes aim at Ray Garrison and the fragile peace he now holds…sending the man once known as Bloodshot spiraling back into the violent world of death, destruction, and disarray! Valiant’s next must-read series in the acclaimed “VALIANT PREMIUM” format soldiers onward in BLOODSHOT SALVATION #2 – featuring covers by Kenneth Rocafort (The Ultimates), Monika Palosz (X-O MANOWAR), Philip Tan (Suicide Squad), Greg Smallwood (Moon Knight), and Glenn Fabry (Preacher)!