Before BLOODSHOT SALVATION #1 Sends Bloodshot Back Into a World of Violence, Relive Each of His Most Perilous Missions and Win Big! 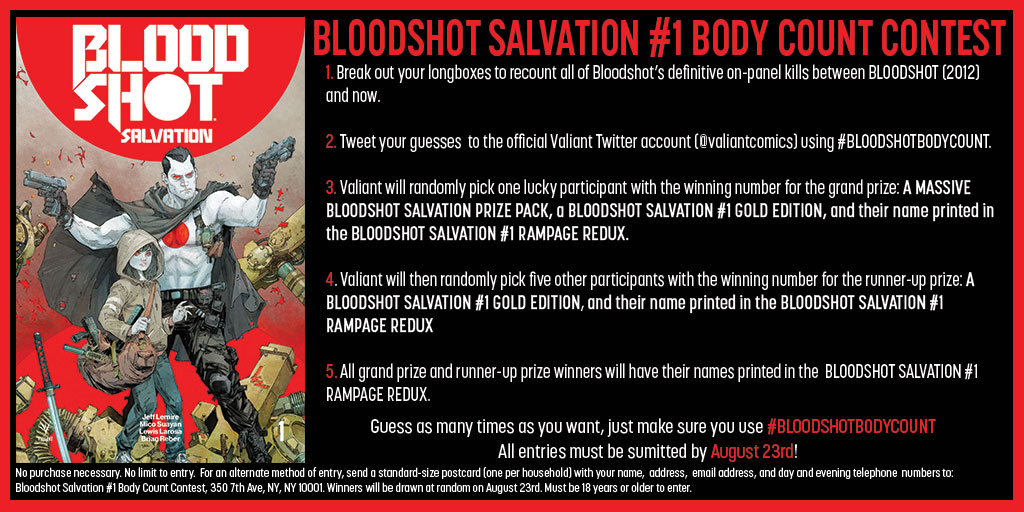 Before the first issue of the fall’s blockbuster new ongoing series slams into comic shops everywhere on September 20th, Valiant is proud to announce the BLOODSHOT SALVATION #1 Body Count Contest – a back-issue scavenger hunt challenging readers to tabulate the number of kills that Valiant’s nanite-enhanced soldier has racked up since his bone-breaking return in 2012!

Break out your longboxes to recount all of Bloodshot’s greatest exploits, and then post your guess to Twitter by August 23rd, just before BLOODSHOT SALVATION #1 – the FIRST ISSUE of the BLOCKBUSTER NEW ONGOING SERIES from New York Times best-selling writer Jeff Lemire (THE VALIANT, Moon Knight) and explosive artists Lewis LaRosa (BLOODSHOT REBORN) and Mico Suayan (BLOODSHOT REBORN) – sends Ray Garrison back into the line of fire!

Bloodshot has finally found peace alongside his true love, Magic, and their newborn daughter, Jessie. But soon, he will be drawn back into the world of violence and bloodshed that created him for a bone-breaking mission of revenge! It will be his darkest, most vicious assault yet…and none of his hundreds of firefights, showdowns, and no-holds-barred battles–from BLOODSHOT to ARMOR HUNTERS to THE VALIANT and beyond–will prepare him for the savagery that lies ahead.

Now, with Ray Garrison’s most brutal mission just around the corner in BLOODSHOT SALVATION #1, the question still stands: Just how many evil-doers and enemies have fallen at Bloodshot’s hand?

But, before that day comes to pass, Valiant is spot-checking with the most knowledgable fans in comics with the BLOODSHOT SALVATION #1 Body Count Contest! Do you think you know Bloodshot better than anyone else? Then send your count with these simple instructions:

1) Estimate your total of Bloodshot’s definitive on-panel kills between BLOODSHOT #1 (2012) and across all Valiant titles released by August 1st, 2017. Make as many guesses as you want, or scour through your back issues and collections for a more accurate number!

4) Valiant will randomly pick one lucky participant with the winning number for the grand prize: A Bloodshot Salvation prize pack!

5) Valiant will then randomly pick five other participants with the winning number for the runner-up prize: A BLOODSHOT SALVATION #1 GOLD EDITION!

5) All grand prize and runner-up prize winners will have their names printed in the BLOODSHOT SALVATION #1 RAMPAGE REDUX.

On September 20th, Bloodshot barrels back to the battlefield for his most heart-wrenching mission yet! Jeff Lemire, Lewis LaRosa, and Mico Suayan begin one of the most soul-shattering tales of the year as the Valiant Universe’s unstoppable killing machine prepares for his greatest sacrifice in BLOODSHOT SALVATION #1 – featuring covers by Kenneth Rocafort (The Ultimates), Monika Palosz (DIVINITY III: STALINVERSE), Tomas Giorello (X-O MANOWAR), Ryan Bodenheim (The Dying & The Dead), Greg Smallwood (Moon Knight), and Dave Johnson (100 Bullets)!