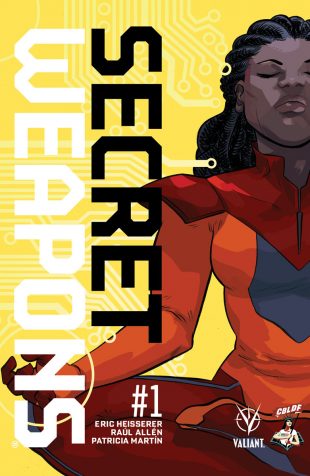 Valiant is proud to announce its support for the Comic Book Legal Defense Fund (CBLDF) with the SECRET WEAPONS #1 SDCC Liberty Variant – a special, limited edition release of the FIRST ISSUE of the acclaimed new series starring Livewire and Valiant’s extraordinary new team of heroes in the making! Featuring a brand-new cover by multiple Eisner Award-nominee Erica Henderson (Unbeatable Squirrel Girl, Jughead), the SECRET WEAPONS #1 SDCC Liberty Variant will debut on Wednesday, July 19th, exclusively at Comic-Con International in San Diego, California and will be limited to 500 copies.

Jump on board here to find out why SECRET WEAPONS – the first game-changing comics collaboration from the Oscar-nominated screenwriter of ARRIVAL and the visionary art team behind WRATH OF THE ETERNAL WARRIOR – is already being heralded as one of the year’s most stunning new series…and how it presages HARBINGER WARS 2, the forthcoming 2018 crossover that will see Heisserer and Allen join fellow creators Matt Kindt (X-O MANOWAR) and Tomas Giorello (X-O MANOWAR) for Valiant’s most seismic event to date.

The government has dispatched Amanda McKee – the technopath codenamed Livewire – to investigate the ruins of a secret facility formerly run by Toyo Harada, the most powerful telepath on Earth and her former mentor. In his quest for world betterment at any cost, Harada sought out and activated many potential psiots like himself. Those who survived, but whose powers he deemed to have no value to his cause, were hidden away at this installation. But Livewire, having studied Harada’s greatest strengths and learned his deepest weaknesses, senses opportunity where he once saw failure. A young girl who can talk to birds… A boy who can make inanimate objects gently glow… To others, these are expensive disappointments. But, to Livewire, they are secret weapons…in need of a leader. Now, as a mechanized killer called Rex-O seeks to draw them out, Livewire and her new team of cadets will be forced to put their powers into action…in ways they never could have imagined.

Henderson’s SECRET WEAPONS #1 SDCC Liberty Variant will be available exclusively at the CBLDF’s booth (#1918) inside the San Diego Convention Center and via the CBLDF website (cbldf.org). All proceeds will directly benefit the First Amendment legal and education work of the Comic Book Legal Defense Fund, an organization that works to protect the freedom to read.

Valiant Entertainment has been a supporter of the CBLDF since 2012 and a Corporate Member of the fund since 2013. This marks the fourth variant cover Valiant has created as a Comic-Con International exclusive for the Fund.

Comic Book Legal Defense Fund is a non-profit organization protecting the freedom to read comics! Our work protects readers, creators, librarians, retailers, publishers, and educators who face the threat of censorship. We monitor legislation and challenge laws that would limit the First Amendment. We create resources that promote understanding of comics and the rights our community is guaranteed. Every day we publish news and information about censorship events as they happen. We are partners in the Kids’ Right to Read Project and Banned Books Week. Our expert legal team is available at a moment’s notice to respond to First Amendment emergencies. CBLDF is a lean organization that works hard to protect the rights on which our community depends. Please support our important work! http://cbldf.org/

Valiant Entertainment is a leading character-based entertainment company that Owns the largest independent superhero universe in comics. With more than 80 million issues sold and a library of over 2,000 characters, including X-O Manowar, Bloodshot, Harbinger, Shadowman, Archer & Armstrong, and many more, Valiant is one of the most successful publishers in the history of the comic book medium. Today, the company’s characters continue to be forged in publishing, licensing, film, video games, and beyond. Valiant consistently produces some of the most critically acclaimed comics in the industry and has received numerous industry awards and accolades, including a Diamond Gem Award for Comic Book Publisher of the Year. In 2015, Valiant announced a multi-picture deal to bring Bloodshot and Harbinger to the big screen as feature films. Visit them online at ValiantEntertainment.com.