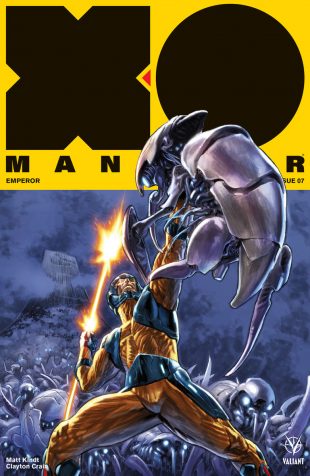 As revealed at ComicBook.com, Valiant is proud to present your first look inside X-O MANOWAR (2017) #7 – the FIRST ISSUE of A POWERFUL NEW ARC and AN ALL-NEW JUMPING-ON POINT for the most successful independent comic book series of 2017… One that will bring Aric of Dacia’s one-man conquest on a hostile alien world to its ultimate breaking point! On September 27th, “EMPEROR” starts here as New York Times best-selling writer Matt Kindt (DIVINITY, Mind MGMT) welcomes aboard superstar artist Clayton Crain (RAI, Carnage) for a startling new chapter elevating X-O Manowar from the trenches of an extraterrestrial civil war…and into the throne of the galaxy’s most powerful seat of power…

A war has been won, a victory has been decided…and, now, an entire alien world kneels before the throne of their new leader: the unstoppable X-O MANOWAR! He has traded his armor for a crown and a new age now begins…even as an extraterrestrial invader readies an interplanetary attack that could pull Aric of Dacia from the newfound safety of his imperial palace and back into the blood-sodden battlefields where his conquest began.

This fall, start reading here with a blood-stained introduction to the record-setting series that has ushered in a new era for Valiant’s most enduring icon…and the whole of the Valiant Universe:

“✮✮✮✮✮… Easily one of the best sci-fi series of 2017, X-O Manowar deserves every grain of acclaim it’s received so far: the characters are awesome, the action is intense, and the storyline is captivating.” – Comic Bastards

“✮✮✮✮✮… Nothing short of phenomenal… A remarkable experience that knocks it out of the park month after month.” – All-Comic

“✮✮✮✮✮… X-O MANOWAR has been an adrenaline rush that’s lit a fire under the comic book market.” – Spartantown

“✮✮✮✮✮… Savage and kinetic… [X-O MANOWAR] is a trip worth taking.” – Comics Crusaders

“✮✮✮✮✮… A perfect book… You need to buy it.” – Comics: The Gathering