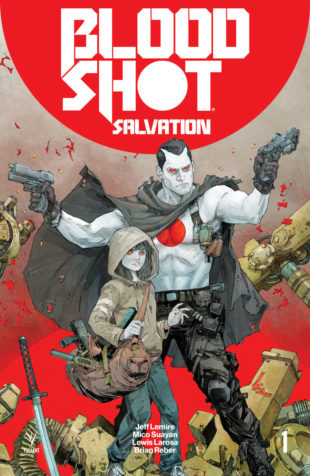 As revealed at Entertainment Weekly, Valiant is proud to present the first lettered look inside BLOODSHOT SALVATION #1 –the FIRST ISSUE of the BLOCKBUSTER NEW ONGOING SERIES from New York Times best-selling writer Jeff Lemire (BLOODSHOT REBORN, Black Hammer) and extraordinary artists Lewis LaRosa (BLOODSHOT REBORN, SAVAGE) & Mico Suayan (BLOODSHOT REBORN)! On September 20th, violence, vengeance, and villains await Valiant’s machine-made soldier as Ray Garrison and his newborn daughter, Jessie, enter an unforgiving gauntlet of punishment that will bleed into the dark future that awaits them both…and will forever redefine the tragic and brutal legacy of Bloodshot for years to come!

“Jessie is the daughter of Magic and Bloodshot. I don’t think I’m spoiling anything by saying that she’s clearly taking after her father a little bit,” writer Jeff Lemire told Entertainment Weekly. “She’s a huge part of the series. She’s the central thing that ties everything together. But I think it’s better to have her be a mystery and let readers discover her through the story. She’s not going anywhere; she’s gonna be a major part of the universe going forward. She’s not just some gimmick.”