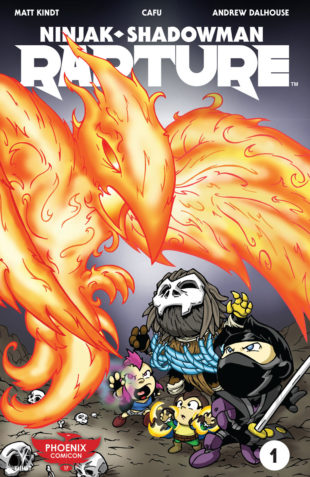 From Thursday, May 25th to Sunday, May 28th, Valiant’s non-stop convention tour is blazing the trail into Phoenix Comicon– and we’re bringing along a massive stash of exclusives, merchandise and panels for three full days of non-stop action!

All weekend long, join Valiant inside the Phoenix Convention Center at booth #760 to see why Valiant reigns supreme as the most acclaimed comic book publisher in the industry today with a selection of paperbacks and deluxe hardcovers for critically renowned and award-winning titles including BLOODSHOT REBORN, BRITANNIA, DIVINITY III: STALINVERSE, FAITH, HARBINGER RENEGADE, NINJAK, QUANTUM & WOODY, SAVAGE and many more! And don’t miss the stacks of Valiant merchandise rolling into Phoenix, including a brand new FAITH & THE FUTURE FORCE T-shirt by artist Kano (Daredevil) [$25] and the RAPTURE #1 PHOENIX COMICON VARIANT, featuring the art of fan-favorite artist Jeff Piña (Zombies Vs. Cheerleaders)! New York Times best-selling writer Matt Kindt (X-O MANOWAR, Mind MGMT) and explosive artist CAFU (RAI) begin Valiant’s spellbinding summer standalone event right here as MI-6 assassin Ninjak unites with the fallen hero known as Shadowman for a harrowing journey into the Deadside…where the very fate of the Valiant Universe lies at the mercy of an ancient evil with an unspeakable connection to the origin of the Shadowman loa itself!

Plus: Get ready for the all-star talent charging into the Valiant booth for signings and free sketches, including David Baron (colorist, BLOODSHOT REBORN; DIVINITY III: STALINVERSE) and Jeff Piña!

Next: Your official initiation into Valiant’s critically acclaimed pantheon of heroes begins on Friday, May 26th at 3:00 p.m. MST in room #232ABC for the VALIANT 101: THE STORY STARTS HERE panel presentation! New to the Valiant Universe? Jump on board right here with a concise and fun-filled introduction to the origins and adventures of Valiant’s greatest and most iconic heroes – from BLOODSHOT and DIVINITY to FAITH and HARBINGER RENEGADE to NINJAK and X-O MANOWAR! From The A.V. Club to Buzzfeed and Entertainment Weekly and dozens more, Valiant has been hailed as the premier superhero publisher in comics today… Now, look no further than this panel of Valiant all-stars to find out where to start!

Finally: Prepare yourself for the biggest and bloodiest battle to ever enter the Valiant Universe on Saturday, May 27th at 3:00 p.m. MST in room #232ABC for the VALIANT: THE ROAD TO HARBINGER WARS 2 panel presentation! The road to Valiant’s biggest, most ambitious and impactful comic book event of all time starts right here! Jump on board to find out what the future holds for HARBINGER RENEGADE, X-O MANOWAR, BLOODSHOT, FAITH, DIVINITY, NINJAK, and the rest of Valiant’s most powerful heroes… and how the coming of HARBINGER WARS 2 will soon be felt across the entire Valiant Universe!

We’ll see you in Phoenix! And don’t miss a moment of the incredible action as Valiant’s cross-country convention road show charges on through Phoenix, San Francisco, Denver and more throughout the summer!