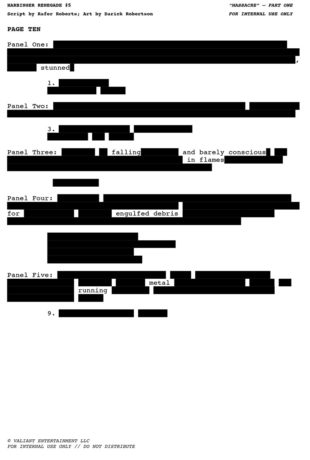 From Creators Rafer Roberts & Darick Robertson, THE ROAD TO HARBINGER WARS 2 Begins with the Summer’s Most Staggering Single Issue

Valiant is proud to present a CENSORED sneak preview of the highly classified, tightly guarded script of HARBINGER RENEGADE #5 – the FIRST ISSUE of “MASSACRE“, A SHOCKING NEW JUMPING-ON POINT that will claim the life of a major comics icon and begin THE ROAD TO HARBINGER WARS 2! On July 12th, the march toward Valiant’s seismic 2018 crossover event starts here as multiple Harvey Award nominee Rafer Roberts (Plastic Farm) and superstar artist Darick Robertson (The Boys, Transmetropolitan) send in the H.A.R.D. Corps for a surgical strike on a major American metropolis…and wind up drawing one of Valiant’s most beloved heroes into the fatal crossfire for a sacrifice that will send shockwaves through the entire Valiant Universe!

“The events of this issue are so secret, we can’t even show you the pages yet,” said Valiant CEO & Chief Creative Officer Dinesh Shamdasani. “Outside of the creators and myself, only a handful of Valiant staffers even know the true identity of the character that is on the line in HARBINGER RENEGADE #5… The reality is that what happens here will be one of the most shocking incidents Valiant has ever committed to print. The ramifications of ‘MASSACRE’ will continue to be felt for a long, long time… After all, it’s no mistake that the epic dynamics contributing toward HARBINGER WARS 2, our most ambitious crossover event to date, begin with a bang right here in this very issue.”

On July 12th, the Valiant Universe reaches a critical turning point as the H.A.R.D. Corps incites a “MASSACRE” that will reverberate for years to come…and each of the Harbinger Renegades stand on guard to honor the fall of a comrade in arms. Rafer Roberts and Darick Robertson begin THE ROAD TO HARBINGER WARS 2 with a bang, only in HARBINGER RENEGADE #5 – featuring covers by Darick Robertson (Happy!), Giuseppe Camuncoli (Amazing Spider-Man), Clayton Crain (4001 A.D.), Marc Laming (Invaders), and Monika Palosz (Divinity III: Stalinverse)!

Plus: The seeds of HARBINGER WARS 2 continue to be sown on June 28th as Livewire steps to the fore to lead an extraordinary new team in SECRET WEAPONS #1 (of 4) – the FIRST ISSUE of Valiant’s hotly anticipated new limited series! This summer, Academy Award-nominated screenwriter Eric Heisserer – writer of the internationally acclaimed, smash-hit motion picture ARRIVAL, as well as Valiant’s upcoming BLOODSHOT and HARBINGER feature films from Sony Pictures – joins forces with Harvey Award-nominated artists Raúl Allén (WRATH OF THE ETERNAL WARRIOR) and Patricia Martin (BLOODSHOT REBORN) to bring Livewire and her squad of superhuman outcasts out of hiding…and onto the frontline of the Valiant Universe’s coming battle against the cybernetic hunter called Rex-O!