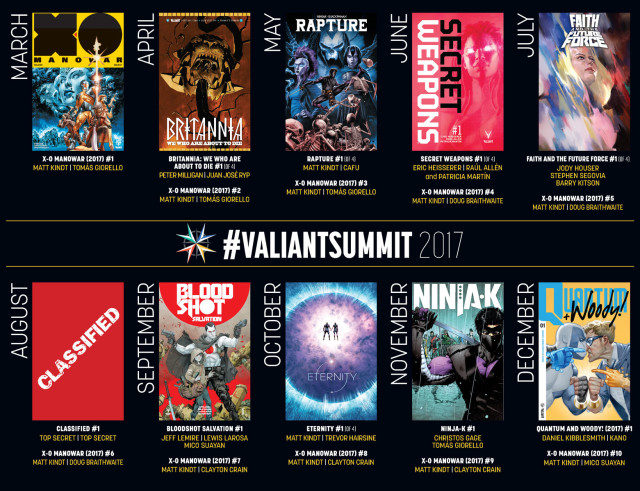 X-O MANOWAR | BRITANNIA: WE WHO ARE ABOUT TO DIE | RAPTURE | SECRET WEAPONS | FAITH AND THE FUTURE FORCE | [CLASSIFIED] | BLOODSHOT SALVATION | ETERNITY | NINJA-K | QUANTUM AND WOODY!

As revealed today during the #ValiantSummit 2017 event live from Twitch TV’s Hyper RPG studios in Los Angeles, Valiant Entertainment is proud to announce “ICONS” – an all-new wave of ongoing series, prestige format projects and standalone events spanning the Valiant Universe’s greatest heroes and top talents! Out of the record-setting success of X-O MANOWAR (2017) #1 – the year’s best-selling series debut from any independent publisher – “ICONS” will continue throughout 2017 with one major new series launch each month, featuring the publisher’s most enduring heroes:

“X-O MANOWAR wasn’t just the launch of a new series, it was a statement of purpose,” said Valiant CEO & Chief Creative Officer Dinesh Shamdasani. “Even before the first issue hit stands, the success of that series has emboldened Valiant and its creators to redouble our efforts and create what might just be our most high-profile roster of titles to date. Over the course of the coming year, Valiant has dedicated itself to bringing the same level of creative vision, formidable storytelling and intensive quality to each of its most important new series and most beloved characters – a process that began with X-O MANOWAR and will soon extend outward into FAITH AND THE FUTURE FORCE, BLOODSHOT SALVATION, NINJA-K, QUANTUM AND WOODY! and some of our most exciting titles yet.”

“Valiant is fortunate to have a team of some of the most dedicated and talented creators anywhere in the industry manning the frontline of our universe, and, together, Valiant’s ‘ICONS’ have a very bright future indeed,” said Valiant Editor-in-Chief Warren Simons. “From FAITH AND THE FUTURE FORCE to BLOODSHOT SALVATION to NINJA-K to QUANTUM AND WOODY!, you’re about to see our biggest and most-demanded characters step into their most memorable adventures yet.”

Rewatch all of today’s #ValiantSummit 2017 announcements on Twitch TV’s Hyper RPG channel or Facebook Live, or find complete details on each series individually below:

BRITANNIA: WE WHO ARE ABOUT TO DIE #1
Written by PETER MILLIGAN
Art by JUAN JOSÉ RYP
Cover by CARY NORD

A BLOCKBUSTER NEW ONGOING SERIES! From New York Times best-selling writer Jeff Lemire (BLOODSHOT REBORN, Moon Knight) and extraordinary artists Lewis LaRosa (BLOODSHOT REBORN) & Mico Suayan (BLOODSHOT REBORN), a bloody and vengeful new era for Bloodshot begins this September as Ray Garrison escapes his violent past to build the one thing he never thought he’d earn: a family. But when a hateful secret from his true love’s past threatens their fragile peace, Bloodshot will be forced to run headlong into a barrage of blood, bullets, and broken bones for a revenge-fueled assault that will have crushing consequences for those he holds most dear…

A VISIONARY NEW SERIES! From the minds of New York Times best-selling writer Matt Kindt and blockbuster artist Trevor Hairsine comes an expedition into the Unknown. Beyond time… Beyond space… Beyond reality itself… ETERNITY awaits!

With great power comes great sibling rivalry! This winter, you’ll believe two men and one goat can split a one-bedroom apartment and still be a credible threat to evil and injustice everywhere when QUANTUM AND WOODY make headlines and take names!