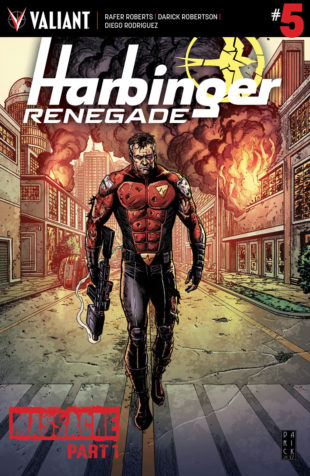 Retailers and fans, please be advised: Due to the shocking on-panel death of a major Valiant hero in July’s HARBINGER RENEGADE #5, Valiant will be taking the unprecedented step of wrapping each issue in a specially manufactured advisory overlay – complete with a clearly marked warning label – that will ship on all copies of the issue at no extra-added cost.

From multiple Harvey Award nominee Rafer Roberts (Plastic Farm) and superstar artist Darick Robertson (The Boys, Transmetropolitan), HARBINGER RENEGADE #5 is the FIRST ISSUE of “MASSACRE” – a four-part jumping-on point laying the foundation for 2018’s seismic HARBINGER WARS 2 crossover event – and will be one of the most consequential and shocking single issues Valiant has published to date. As a newer, deadlier H.A.R.D. Corps team lays siege to an American metropolis, one of Valiant’s most beloved heroes will pay the ultimate price – and the immediate and lasting ramifications of their death will send shockwaves across the Valiant Universe as THE ROAD TO HARBINGER WARS 2 begins in full force.

On July 12th, the H.A.R.D. Corps declares war on all psiots on American soil – and there will be hell to pay! “MASSACRE” starts here as Rafer Roberts & Darick Robertson memorialize the fall of a Valiant icon – and begin the march towards HARBINGER WARS 2 – only in HARBINGER RENEGADE #5! Featuring covers by Darick Robertson (Happy!), Giuseppe Camuncoli (Amazing Spider-Man), Clayton Crain (4001 A.D.), Marc Laming (Invaders), and Monika Palosz (Divinity III: Stalinverse), witness comic book history in the making right here in HARBINGER RENEGADE #5 – now shipping with a special advisory overlay on top of each cover!

PLUS: For information on HARBINGER WARS 2, don’t miss the year’s biggest round of news and announcements from any major comic book publisher as Valiant hosts the third annual #ValiantSummit on Monday, April 17th – broadcasting live from Twitch TV’s Hyper RPGstudios in Los Angeles, CA at 2 pm ET/11 am PT! Watch live at Twitch.tv/HyperRpg and follow along on Twitter using the #ValiantSummit hashtag.