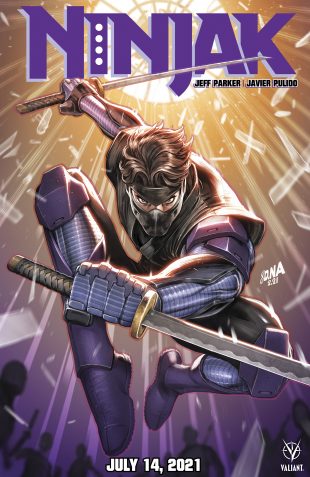 May 3rd, 2021 – Valiant Entertainment’s top superspy is stepping out of the shadows…

From Ringo Award-winning writer JEFF PARKER (Batman ’66, James Bond Origin, Thunderbolts) and visionary artist JAVIER PULIDO (The Amazing Spider-Man, Robin: Year One, She-Hulk), NINJAK #1 follows Colin King, aka NINJAK, as the secret operative is on the run after the identity of every MI6 agent is exposed. Now, Colin must embark on a global adventure to evade the deadly people who have him in their sights…

Check out the first seven pages from the upcoming series, below.

NINJAK #1 by writer Jeff Parker, artist Javier Pulido, and letterer Dave Sharpe goes on sale July 14th, 2021, and features covers by David Nakayama, Caspar Wijngaard, Damion Scott, Ibrahim Moustafa, and Javier Pulido. The debut issue is available for preorder now at a comic shop near you. Check out The Hollywood Reporter’s article for an interview with Jeff Parker.